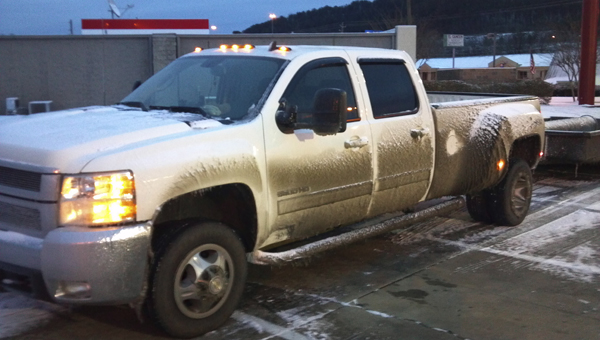 Dusty Smith’s truck was covered in ice by the time he got to Irondale, where he spent Tuesday night in the truck.

Dusty Smith, a Marengo County resident, was one of the many unfortunate people stranded in the Birmingham area Tuesday.

Smith was traveling from Pine Hill to Irondale to deliver some parts for International Paper and met winter weather when he got to the Bessemer area.

“By the time I got to the interstate around Bessemer, I started hitting the snow and ice,” he said. “When I got on I-459, it took me six hours to travel those 29 miles.” 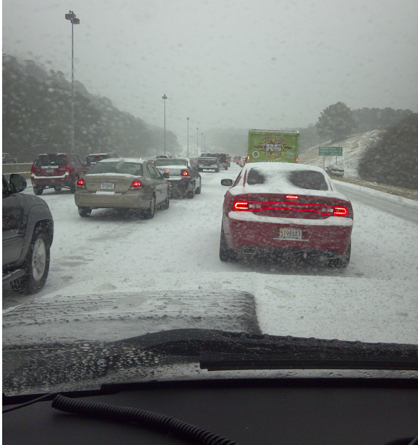 Traffic ahead of Smith was at a standstill on Interstate 459.

“I slept in my truck at a gas station in Irondale,” he said.

Smith wasn’t able to make his delivery in Irondale because by the time he got to the location, the street was blocked by wrecked vehicles and the workers had already left.

“From Pine Hill to Irondale took me seven hours and 45 minutes,” he said. “It really looked like a white warzone. I saw about 15-20 abandoned cars on 459, not even on the shoulder. Vehicles with rear-wheel-drive and 18-wheelers would get stopped on a hill and they couldn’t get going again.”

He added that there were many people walking along the interstate to try to get home or to somewhere warm.

“I drive a one-ton dually, and I’m convinced that if I didn’t have four-wheel-drive, I would have been in a ditch like so many other people,” he said. “I was able to navigate the shoulder to keep moving forward. It was just a mess.”

If you were stuck in Birmingham on Tuesday, we want to hear from you. Call 289-4017 or email news@demopolistimes.com.