Schools will be closed Thursday

While the snow, sleet and freezing rain has moved out of the area, the conditions are still hazardous.

The Demopolis Police Department and the Marengo County Sheriff’s Office are advising people to stay off the roads as much as possible. County roads remain closed Wednesday and travel on state roads is not advised. 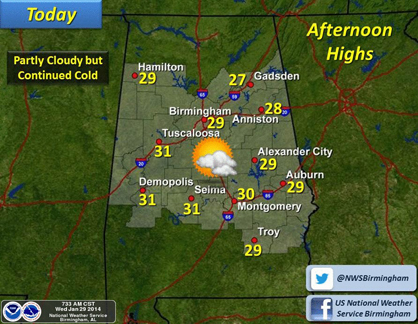 “The roads are still icy, even though you can’t see it sometimes,” DPD Chief Tommie Reese said. “We’re still encouraging to only travel if necessary. People in this area aren’t used to snow and ice, and driving becomes difficult.”

The National Weather Service forecast says all of the precipitation is gone and clear skies are expected throughout the day and night Wednesday. Temperatures aren’t expected to rise above freezing before sunset, so much of the accumulation will remain until about midday Thursday. The high for Thursday is forecast to be in the mid-40s.

The NWS has also issued a hard freeze warning for Wednesday night and Thursday morning between the hours of 9 p.m. and 9 a.m. 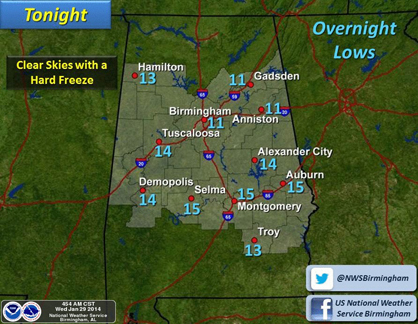 “All county and state roads are classified as impassable at this time, and we’re still encouraging people to stay off the roads as much as possible,” he said. “We will reopen the roads at noon Thursday, but still want to advise people to be mindful that there will still be melting going on as well as icy patches in places.”

All local school systems will be closed Thursday and will reopen Friday. The Marengo County Courthouse will reopen at noon Thursday.

McKinney added that they responded to three accidents Wednesday morning.

“With limited travel, we’ve had three accidents this morning,” he said. “It would be a lot worse if more people were out driving.”

He said there were some injuries in the accidents they have responded to, but none were serious.

McKinney also said there have been no reported power outages in the area.