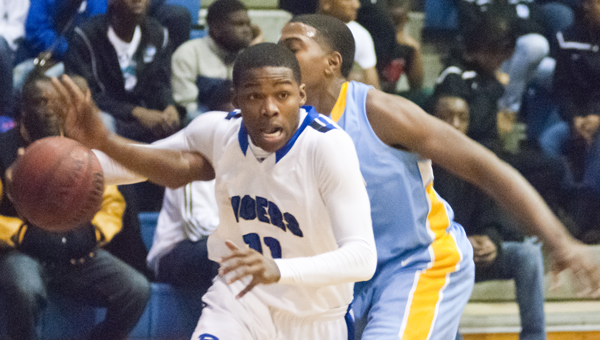 DJ Howell drives with the ball, trying not to get it stripped by a Selma defender.

The Selma Saints defeated Demopolis in both the girls and boys games Friday night in what turned out to be two heartbreaking losses for the Tigers.

The Lady Saints defeated the Lady Tigers 40-39, while the Selma boys defeated Demopolis 52-47.

In the girls game, both teams started with high energy, but it wasn’t converting into points for either team. At the end of the first quarter, Demopolis led 6-4.

Selma was able to break through Demopolis’ tough defense in the second quarter to take a 16-11 lead into the locker room. 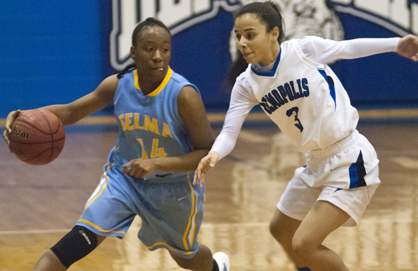 The third quarter continued to be a struggle offensively for both teams. Demopolis went on an 8-0 run to open the quarter, but Selma answered back with an 8-0 run of their own to lead 24-19 going into the fourth quarter.

“Going into the fourth, we knew we had to do something,” Demopolis head coach Tony Pittman said. “We got some easy shots early in the quarter and our momentum picked up.”

With less that two minutes to go in the game, Selma led 34-28 and Demopolis had possession of the basketball. Sha’Deitra White hit a three-pointer for the Lady Tigers, and then Erica Bennett forced a turnover on the inbounds pass. Bennett then hit a three to tie the game. Selma missed a shot on the other end of the court, and Bennett was fouled on the rebound.

She hit both free throws to put Demopolis ahead 36-34. Sylvia Clayton added a three pointer for Demopolis to put them up 39-38 after the teams traded baskets. The Lady Saints were able to force a steal and Ayana Moore got the easy layup with under 20 seconds to play. This proved to be the game winner for the Lady Saints.

“That was a big win for us,” Selma head coach Anthony Harris said. “It clinched the area title for us. I knew it was going to be a fight, and both teams played hard tonight. We’ve got to go back and look at some things we can correct. We have to rebound better. Our inside game wasn’t there tonight.”

Areyanna Williams had 8 points, 7 rebounds and 4 steals for the Lady Saints. Jamya Smith led the way for Selma with 12 points. 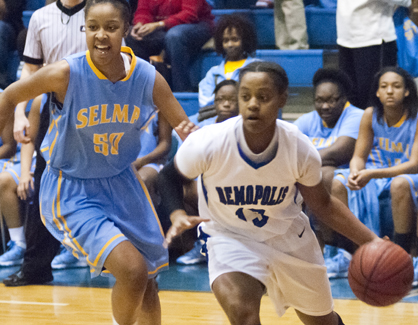 Bennett led the way for Demopolis with 14 points and 4 steals, and Ivery Moore added 10 points of her own.

Pittman said even though it was a tough loss, it was a big learning experience for his young team.

“With a young team, we can pull from that experience going forward,” he said. “We’re going to focus on playing hard, minimizing mistakes and taking care of the basketball for the area tournament.”

The boys game didn’t see as much back-and-forth as the girls game did. Demopolis led from the opening possession until there was under a minute to play in the game.

The Tigers spread the court and forced Selma to play one-on-one basketball, which got them out of their rhythm for much of the game.

The slow pace of the game worked in Demopolis’ favor, and the Tigers led 9-6 after one and 23-19 going into halftime.

“Our guys were aggressive and we were attacking,” Demopolis head coach Rodney Jackson said. “We were the aggressors early on.”

Demopolis had their biggest quarter in the third when they scored 17 points to stretch the lead to eight by the end of the quarter. 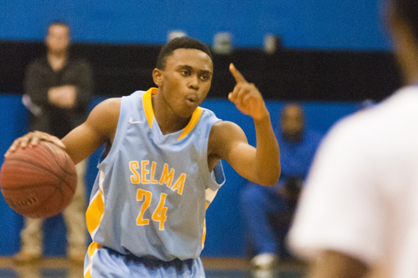 Alfred Robinson brings the ball up the court for Selma in their win Friday night over Demopolis.

In the fourth quarter, Selma started making baskets, and Demopolis made some mistakes that helped the Saints back into the game. Selma kept chipping away at the lead before taking the lead with 45 seconds to play on a free throw by Kahmaul Jones.

“We just didn’t execute in the fourth quarter,” Jackson said. “We were missing layups sand turning the ball over. We have to have more people step up for us.”

Jones led the way for Selma with 16 points and 6 rebounds. Keshawn Ford had 15 points and Aderick Moore had 13 rebounds in the game.

For Demopolis, Roderick Davis led the way with 15 points. Charles Tripp had 10 points, and Demetrius Kemp had an outstanding night with 9 points, 13 rebounds, 3 blocks and 3 assists.