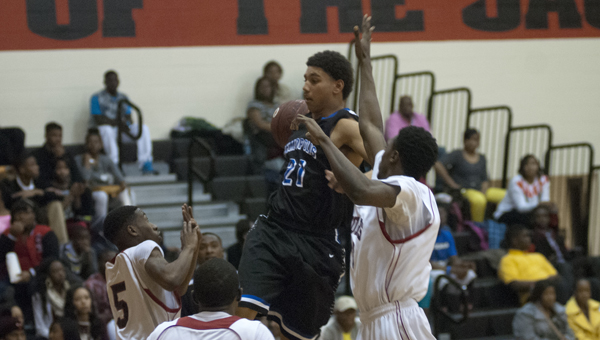 Demetrius Kemp goes airborne to pass the ball off to a teammate in Friday night’s season-ending loss to Sumter Central.

The Demopolis Tigers boys basketball season ended Friday night with a 67-33 loss to Sumter Central in the Class 5A, Area 6 tournament.

“I think we had a great gameplan coming into the game, but we just had too many turnovers,” DHS head coach Rodney Jackson said. “Sumter Central has a really good basketball team.”

The Tigers opened the game trying to slow down the pace to try to keep the Jaguars out of a rhythm, but turnovers turned into easy baskets for Sumter Central.

The Jaguars jumped out to a 13-2 lead in the first quarter, but the Tigers made two baskets to close out the quarter to stay within striking distance at 13-6.

In the second quarter, Demopolis closed the gap to open the quarter, but the Jaguars defense locked down, and they were able to stretch the lead to 29-13 by the half.

At halftime, Roderick Davis led the way for Demopolis with five points. Tripp Perry had four for the Tigers at the break. 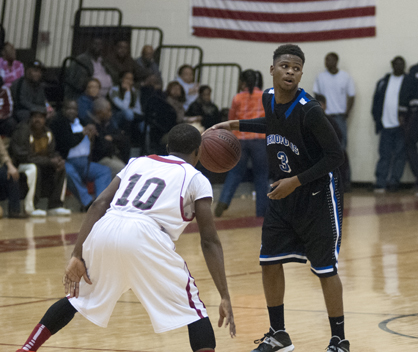 Kiante Jefferies brings the ball up the court for Demopolis.

Demopolis opened the third quarter and cut the lead down to 10 at 31-21 with five minutes to play in the quarter. Jackson called a timeout to get a gameplan together for Demopolis to close the gap even more, but turnovers allowed Sumter Central to close the quarter on a 10-1 run.

Both teams emptied their benches midway through the fourth quarter, and the Jaguars ran away with the victory.

“This was really a disappointing season for us,” Jackson said. “We had higher expectations going into the season. Overall, though, I think my guys played hard all season. We’re going to continue to work and get this program going in the right direction.”

Davis finished the game as the leading scorer for Demopolis with seven points, and Perry was second in scoring with six. Charles Tripp and Demetrius Kemp both had four points for the Tigers.

In other games around the county, the John Essex defeated Linden 65-63, and A.L. Johnson fell to Sunshine 92-66.