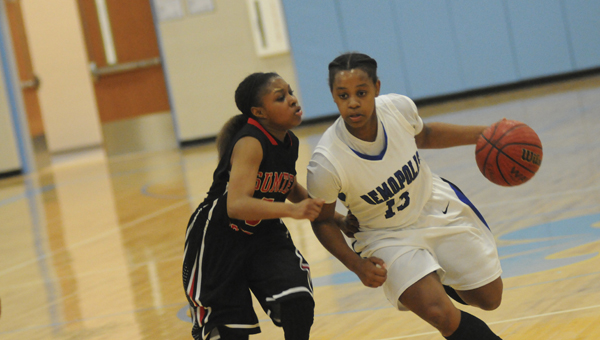 Lady Tiger DeeDee White dribbles around a defender during Demopolis’ 49-48 win over Sumter Central in the Class 5A, Area 6 semi-finals. With the win, Demopolis moves on to face Selma in the area finals.

Deedee White hit a game winning jump shot in double overtime to lead the Demopolis Lady Tigers past Sumter Central 49-48 in a Class 5A, Area 6 semifinal.

With the Tigers trailing with 51 seconds left, White dribbled the ball down the floor and pulled up inside the three-point line for a long jumper that gave the Tigers a one-point lead.

Sumter Central was unable to score on two possessions in the final minute, allowing Demopolis to hang on for a hard fought win.

“In the playoffs, it’s always tough to beat teams,” Demopolis head coach Tony Pittman said. “At this point it’s all about surviving. We just found a way to come back. We have to step it up in the next round and play our best in the finals.”

The Tigers will advance to play Selma in the area championship game Saturday night at 6 p.m.

Demopolis actually trailed in regulation, but rallied to force overtime. 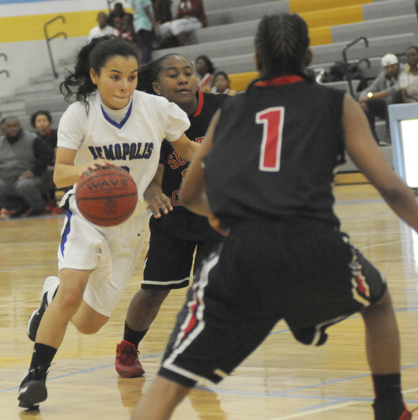 Lady Tiger Sylvia Clayton dribbles between two defenders during Demopolis’ 49-48 win over Sumter Central in the Class 5A, Area 6 semi-finals. With the win, Demopolis moves on to face Selma in the area finals.

The script was flipped in the second overtime, because the Tigers led most of the way. Sumter Central completed its own rally, tying the game with under a minute to play in the extra session.

In double overtime, the Lady Jaguars led 49-48 with over a minute to play, but White, who led the Tigers with 15 points, made sure the Tigers’ season wouldn’t come to an end by making the big jump shot.

Despite its crazy finish, the game actually got off to a slow start.

The final quarters were back and forth. Despite multiple miscues from both teams, the Lady Jaguars had a small lead in the fourth quarter, but Demopolis mounted a comeback.

Lady Tiger Julian Rembert had a four-point play after making a three point-play and the ensuing foul shot after she was bumped on the arm on the shot.

The lead changed multiple times in the fourth quarter, but miscues by both teams kept the score at 35 and forced overtime.