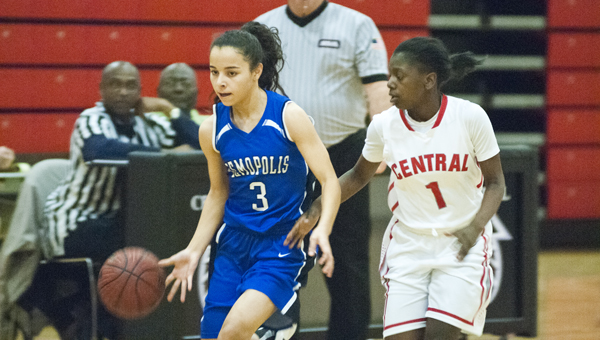 Sylvia Clayton dribbles down the court for Demopolis with Central’s Jada Prewitt in pursuit.

Central High School-Tuscaloosa spoiled a comeback by the Demopolis girls in a sub-regional game Thursday.

The Falcons squeaked out a 63-60 home victory, after leading by as many as 16 points in the second quarter.

The Lady Tigers never gave up and fought back into contention, taking a 50-51 lead with a little over four minutes left in the game.

“This team has heart, and they are not going to give up,” said DHS head coach Tony Pittman. “This team is going to keep fighting. I have nothing but high praise for them.” 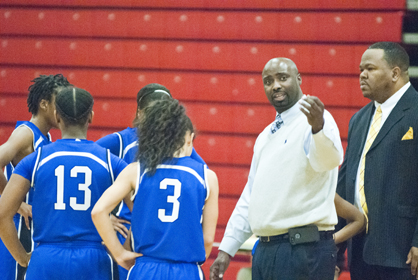 Head coach Tony Pittman talks with his team during a timeout.

After being tied 2-2, Central went on a run and Demopolis struggled to make baskets. The momentum stayed with the Falcons through the middle of the second quarter, propelling the home team to a 31-15 lead.

Demopolis would slowly start to whittle that number down. A 3-pointer by Julian Rembert drew the score to just three before Central hit two free throws in the final seconds of the first half.

The Lady Tigers tied the score 48-48 early in the fourth quarter. The final period would see multiple lead changes and was tied as late as 1:36 left in the game.

Another late 3-pointer, this one by Sha’Deitra White, got DHS to 61-60 with 22.3 seconds left. Central’s Jada Prewitt would then make two free throws to give the Lady Tigers the ball back down 3 points with just over three seconds left. 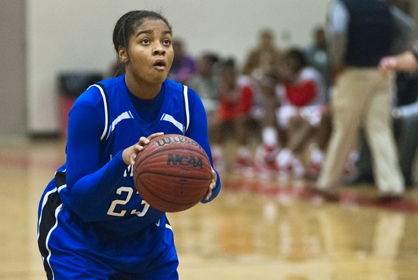 However, the Lady Tigers couldn’t get the ball down the court before time expired, ending the team’s season.

Ivery Moore lead Demopolis with 18 points. Just behind was Erica Bennett, who added 17.

White had 7 points, while Sylvia Clayton and Rembert each had 6.

Though Thursday’s outcome was disappointing, Pittman said he is looking forward to seeing what his young team does over the next few seasons. The 2014 team had no seniors and just two juniors, both who are out with injuries.