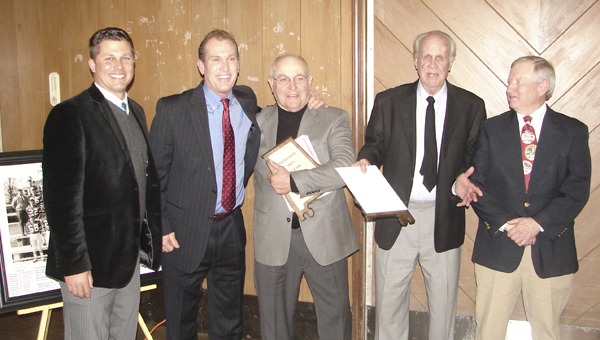 By Drew Tucker
The Demopolis Times

This years’ inductees included the youngest ever to be included in the Hall of Fame. The 1967 Thomaston football team was also recognized for their excellence under coach Roland Atkins. They finished with a perfect 12-0 record and a 1A State Championship.

Akins started his coaching career under the legendary “Pistol” Henders at Linden High School, before moving to Marengo County High School in 1961. There he filled the role of head coach for baseball, basketball and football.

From Marengo County he moved to Pickens County where he continued to coach all three sports. Coach Akins also served 39 years in the Alabama High School Officiating Program and was given the Distinguished Service Award.

Barr played on three undefeated teams and two state championship teams at Linden High School. In five years as a running back, his teams lost four games. He was All-Blackbelt Conference twice, All-State once, and was a member of Beta Club and the National Honor Society. He was highly recruited as a senior before going to play at Georgia Tech for coach Bobby Dodd.

He played two years at Livingston University before walking on at Auburn under legendary coach Pat Dye. He played his way onto the field, earning a scholarship in 1981 and 1982.

McKnight excelled as a football player as well as a baseball coach. He was the quarterback for the 1967 Thomaston Tigers, who were honored during the ceremony. He led his team to an undefeated state championship in the first state playoff system.

McKnight lettered in football and baseball at Marion Military Institute. After graduating from Auburn, Clifton was named the head baseball coach at Wilcox County High School. From 1977 to 2004, coach McKnight taught and coached baseball at Demopolis High School. In 1985 they finished state runners-up, and in 1986 they won the state championship.

Phillips is the youngest person to be inducted into the Hall of Fame. He lettered five times in three sports at Demopolis Academy, helping his team to a state football title and three state base titles in 1990, 1994 and1995. He was named AISA Class A state tournament MVP, AISA Player of the Year, and was the only AISA player named to the Birmingham News Super All-State Baseball Team.

He signed with the University of Alabama in 1995. He was a four-year starter on three College World Series teams, four SEC East Championship teams and one SEC Championship team. He was drafted by the New York Yankees in 1999 and played 13 years of professional baseball with the Yankees, Cincinnati Reds and the New York Mets and is one of seven players to hit a home run in his first at bat. He is currently the hitting coach at the University of Alabama.

When asked what it means for his hometown to honor him in this way, Phillips replied, “It means a lot. It’s very special. When the place where you grew up shows support and appreciation, you can’t help but think of all the people who helped along the way. Coaches, teachers, parents and neighbors all play a part in success.”