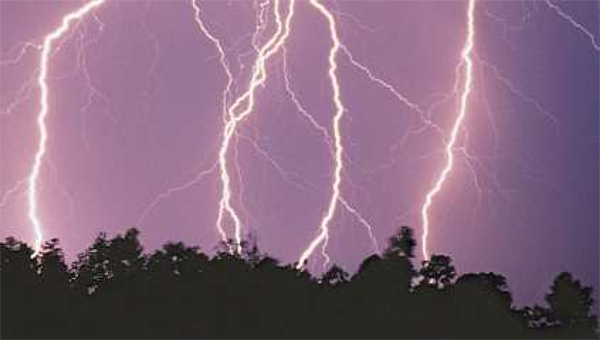 On average, three Alabamians die each year due to lightning strikes.

The summer months are the deadliest as far as lightning is concerned. In an average year, three people will be struck and killed by lightning in Alabama and at least six more will be injured.

According to NOAA, over the last 20 years, the United States averaged 51 annual lightning strike fatalities, placing it in the second position, just behind floods for most weather-related deaths.

During lightning storms, move inside a well constructed home, a large building or an all-metal vehicle. Stay away from electrical appliances and do not use the telephone.

If you are in a boat, get off the water and into a substantial building, or at least into an enclosed and all-metal vehicle with the windows up.

If you don’t have time to get off the water, lie down in the boat with cushions between you and the metal sides and bottom.

If you are caught outdoors and are too far away from shelter, you should crouch down low but do not lie flat on the ground. Avoid isolated trees and stay away from the tallest trees. If in the woods, pick a small grove of trees as your shelter and stand at least five feet away from the trunk of the nearest tree.

If you are with a group of people in an open area and cannot get to shelter, spread out before you take last-ditch efforts.

The best advice is to check the forecast and watch the sky for storm development and not put yourself in a situation where you are out in the open during a lighting storm.

On Wednesday, the National Weather Service is encouraging everyone to conduct their own tornado drill at 9 a.m. The timing will coincide with the weather service’s weekly NOAA All-Hazards Radio Test.

An actual warning will not sound during the test but the weather service says it would be a great opportunity for schools, businesses and homes around Central Alabama to practice what they would do in the event of a tornado warning.