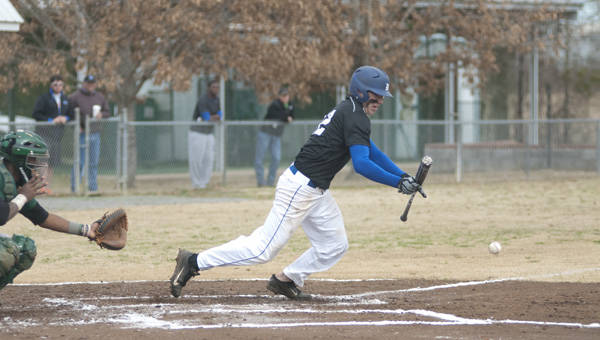 Michael Brooker lays down a bunt for Demopolis against Dallas County.

The Demopolis Tigers earned their first win of the season Saturday morning with a 7-6 victory over Dallas County.

Small ball was the name of the game for the Tigers as they built an early lead on singles and bunts.

Dallas County plated one runner in the top of the first inning after a passed ball from Demopolis pitcher Adam Sellers.

Demopolis responded in the bottom half of the first, scoring three runs of their own. Tyler Oates brought in Seth Aiken on a groundout and Stephen Stewart brought in Michael Brooker on a groundout. A single by John Anthony Morrison scored Matt Eicher to give the Tigers a 3-1 lead after one.

The Tigers added to their lead in the second off of a two-RBI single by Oates that brought in Aiken and Brooker. 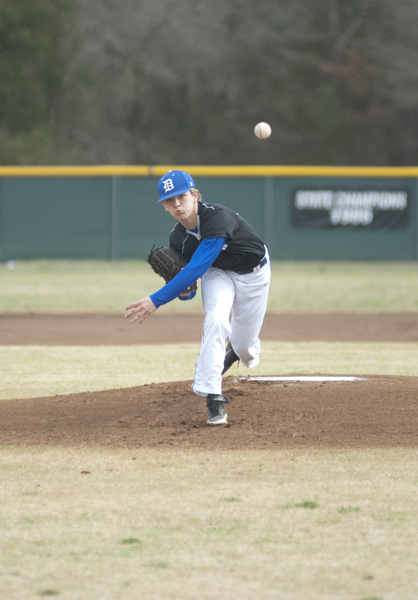 In the top of the fourth, Sellers allowed a run on a RBI double from Prince Tolbert. After giving up the double, DHS head coach James Moody brought in Oates to finish out the inning. Oates pitched one and two-thirds innings.

In the top of the sixth, Dallas County was able to retake the lead after Oates gave up a few runs. Oates walked three and gave up a hit while only getting one out in the top half of the sixth. Eicher was brought in to relieve him, and after giving up two singles, got out of the inning. David Robertson, Gabe Denson, William Lofton and Bruce Talbot crossed the plate for the Hornets.

In the bottom half of the inning, the Tigers focused at the plate and got the lead back that would earn them the win. Eicher walked and Oates doubled to give Stewart a chance at the plate with one out and two runners on base. A deep sacrifice fly scored Eicher to tie the game at 6-6. Wil Stephens then doubled to bring in Oates from second to give Demopolis their final lead of the game.

Eicher was awarded the win in the game. 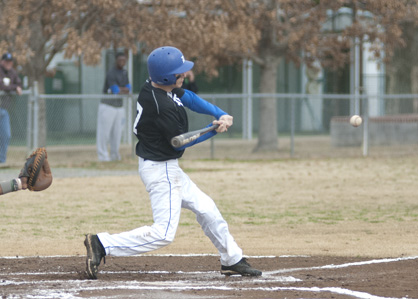 “I thought we were working and trying to do what we needed to do out there,” Moody said. “Our ability to stay focused is a problem right now, though. That’s what happened when we went into a lull in the fourth and fifth innings.”

Moody said getting the first win out of the way is big for this team.

The Tigers will face Clarke County at 5:30 p.m. Saturday evening.