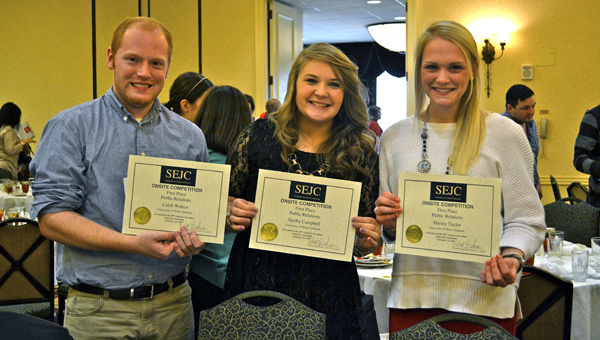 Students from one of the University of West Alabama’s newest academic programs competed at the Southeast Journalism Conference in Lafayette, La., Feb. 20-22 and brought back to Livingston a host of awards. Students majoring in Integrated Marketing Communications placed in five of SEJC’s Best of the South categories and two on-site competitions for a total of seven awards.

UWA was one of 35 schools from the southeast that submitted entries for the various competitions, totaling 440 entries. 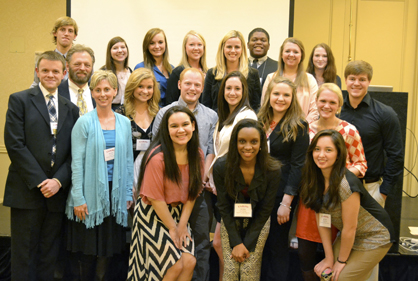 UWA students and faculty from the journalism and communications program attended the annual Southeast Journalism Conference in Lafayette Feb. 20-22, bringing back to Livingston a host of awards for team and individual competitions.

Tiger Pause, UWA’s student newscast, won second place honors in the Best of the South category for college video news program, placing higher than both Troy University and the University of Mississippi.

“The Integrated Marketing Communications major has attracted an impressive number of talented and intelligent students. We are so proud to be able to compete, and win, against some of the more well-known journalism programs in the south,” said Dr. Amy H. Jones assistant professor of journalism and speech at UWA, who has attended the SEJC conference with UWA students for eight years. Jones also serves as faculty advisor of the Tiger Pause broadcast team.

Also traveling with the UWA competitors was Dr. Tina N. Jones, professor of English and journalism, Greg Jones, instructor of composition and literature; and Will Nevin, languages and literature lecturer.

Following the competitions, all entries are given a rating, and judges are encouraged to provide comments and professional advice. The ratings and commentaries are given to each school’s faculty delegate to distribute to his or her students who enter.

UWA Provost David M. Taylor said, “I extend my congratulations to the student delegation who represented the University so well at SEJC. In addition, I speak on behalf of the University in thanking our faculty for the role that they play daily in building an outstanding journalism and communications program at UWA. I am reminded of their dedication to teaching and guidance when I see students who are so eager to follow the career path they have chosen.”

SEJC recognizes student work in its Best of the South competition, with 22 categories for individual competition and eight for school teams. The competition is open to schools from eight states—Alabama, Arkansas, Florida, Georgia, Louisiana, Mississippi, North Carolina and Tennessee—that are members of the organization. Onsite competitions allow students a real-world opportunity to prove their skills in each of eight different competitions.

“The real value of the competition for our students is the on-site competitions, when they can compete on a level playing field with students who attend schools with long established journalism programs,” explained Greg Jones, faculty advisor of UWA’s muse news publication.

At the annual conference, students benefit from workshops, roundtable discussions and a keynote address from professionals across the nation whose work has contributed to the overall service and betterment of all areas of journalism.