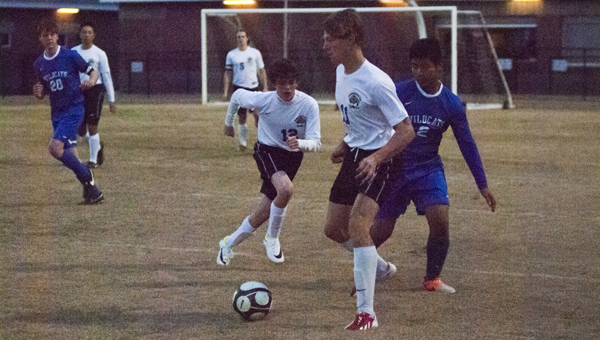 Adam Brooker (No. 11) had the first goal of the night for Demopolis.

The Tigers found themselves down 1-0 early but then went on a scoring frenzy midway through the game.

Adam Brooker scored the first goal for Demopolis on a fast break with 7:55 to play in the first half. Cristian Velez soon added another to put the Tigers up 2-1 at halftime.

Demopolis would keep the momentum going in the second half. Austin Brooks scored two quick goals to give the Tigers a 4-1 advantage.

However, the Wildcats weren’t out of it and mounted a comeback, adding two scores to draw to within one.

But that’s as close as Tuscaloosa County would get before time expired.

Demopolis coach Brad Daniels said he was proud of this team’s play and that he saw improvement.

“They showed a lot of teamwork,” Daniels said. “We had a lot of shots on goal — that’s something we wanted to work on.”

The team had 35 shots on goal during Tuesday’s match, up from as low as 15-20 in last weekend’s tournament.

“They passed the ball a lot better. They communicated better and played a lot more aggressively,” Daniels said.

He also credited Andy Tarpley, Leif Midgorden, Luis Galvan and Logan Fendley for their play on defense. Austin Beckum had 17 saves at goal.