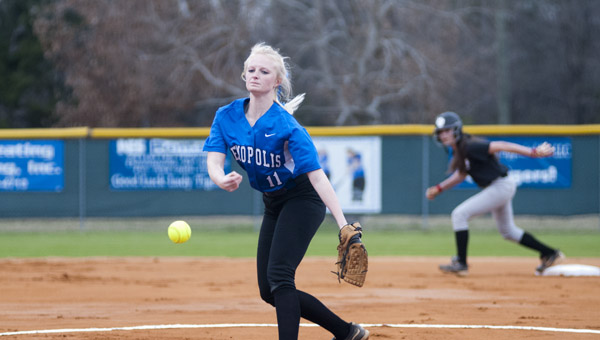 Hanna Malone pitched five scoreless innings for Demopolis in their win over Brookwood on Tuesday.

Anna Caroline Logan hit a walk-off single to give the Demopolis Lady Tigers a 4-3 win over Brookwood on Tuesday night.

Logan drove in Nicole Wilkinson with the bunt single in a tie game in the bottom of the seventh inning.

“Tonight was a step in the right direction,” DHS head coach Joey Browder said. “It takes baby steps, but we’re getting there. Being able to finish a game was big for us.”

Hanna Malone started the game for Demopolis and pitched five scoreless innings, only giving up four hits in the game.

“We got five strong innings from her,” Browder said. “We’re looking for her to keep getting stronger as the season goes on.” 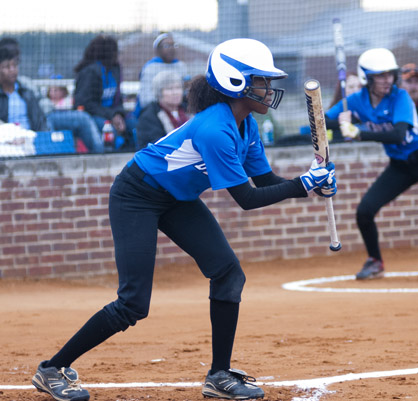 Jessica Adams squares up to bunt.

The game remained tied at zero until the bottom of the fourth inning when Demopolis jumped ahead 3-0. Jessica Adams walked to lead off the inning and Courtney Smith singled to put two runners on base. A RBI single from Abby Latham drove in Adams and a two-RBI single by Baleigh Grace drove in Smith and Latham.

Kendall Hannah came into the game in the sixth to relieve Malone, and Demopolis held their 3-0 lead until the top of the seventh when Brookwood tied the game. The Lady Panthers loaded the bases and a RBI triple by Taylor Parker drove in Ashley Hagood, Brighlyn Rowland and Morgan Gaither.

In the bottom half of the seventh, Julia Veras singled to open the inning. Wilkinson was brought in as a courtesy runner, and she then stole second. She was moved over to third on a single by Grace, and Logan brought her in with a bunt single to end the game.

“This was a total team effort tonight,” Browder said. “We have to be able to keep playing this way.”

The Lady Tigers will host Bibb County on Friday night at 4 p.m. and they will compete in the Brookwood Bash on Saturday.