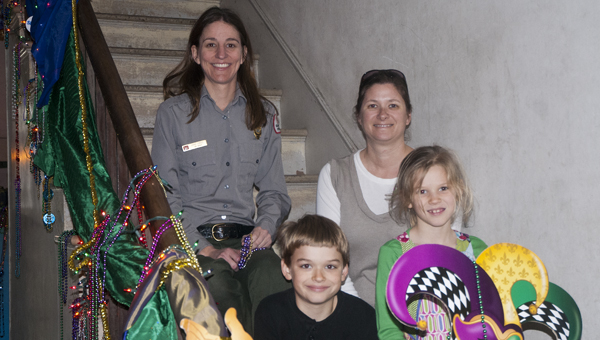 “It’s costumes, fun lighting, lots of beads and basically everything you’d expect in a Mardi Gras party,” he said. “Lyon Hall will be decked out, and it’ll be a lot of fun.”

“Bryan and Mikey” will be playing live music at the event again this year.

A court will also be chosen during the event, and it is based off of people’s costumes. While costumes aren’t required, Brooker said they’re encouraged.

“The costumes make it a lot of fun,” he said. “We’ll name a full court, including king, queen, prince, princess, duke, duchess and jester. We don’t require costumes, but we do require masks. Honestly, though, if someone isn’t wearing a mask, they’ll feel out of place.”

Brooker added that any kind of mask is acceptable, from a Lone Ranger mask to an elaborate feathered mask. The historical society is selling masks at the Craft Corner next to Bluff Hall for between $2 and $10.

There will be a full menu of hors d’oeuvres with a Creole flair, and the drinks are BYOB. Set-ups will be provided for drinks.

“We’ll have soft drinks and orange juice and ice,” he said. “We’ve got bottle openers and whatever people need. They just have to bring their own alcohol.”

During the event, there will be mingling and dancing, and Brooker said the entire home will be open, so if people don’t want to be in the main room with the loud music, there will be tables set up in other rooms as well for people to use.

Tickets for the event are $20 and are available at the Craft Corner. Tickets will also be available at the door, but Brooker encourages people to buy their tickets in advance. The masquerade is for ages 21 and up.