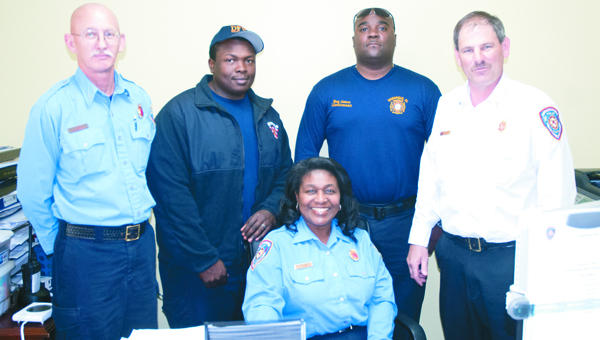 The Demopolis Fire Department has a big impact on the city day in and day out.

Chief Tommy Tate and the firefighters respond to calls around town and ensure the safety of the citizens of Demopolis.

One person in the fire department that is often overlooked by the public is Vanessa Watson, the department’s administrative assistant. She oversees much of the day-to-day operations within the department and puts out different type of fires.

“She does so many things for us,” Tate said. “Officially, she’s our administrative assistant, so she assists me with secretarial duties. But what she does goes far beyond that.”

When someone calls the fire department, Watson answers the phone with enthusiasm each and every time it rings.

“She always answers the phone with a bubbly voice,” Tate said. “And her attitude around the station keeps everyone’s spirits up.”

Tate added that one of the biggest things she does that isn’t in her job description is lifting the spirits of the firefighters after a tough call.

“If we come back after a bad fire, she’s always there with a word of encouragement telling us it’s going to be OK,” he said. “Her attitude doesn’t allow any of us to be down when we’re here.”

Watson said her faith is what allows her to be so positive all the time.

“My trust in the Lord allows me to be encouraging when anyone needs it,” she said. “It lets me see the positive in things so I can be positive.”

Tate said his job is a lot easier because of everything Watson does working with vendors and other people.

“She takes care of a lot of little things that add up to be a whole lot,” he said. “By doing that, she allows me to be able to focus on my job more. She does her job, but she goes above and beyond. I’ve never heard her say no to anything. She’s a great asset to the department and to me.”

Watson has worked with the fire department for close to five years, and she said the job is the best thing that has come along for her.

“This is the best door that could open for me,” she said. “I truly enjoy my job. I’m a people person, and I enjoy communicating with everyone. I love to talk, and this job allows me to do that.”

“Learning to write a grant was the biggest challenge I’ve faced here,” she said. “Chief Tate gets the information, but we have to sit down and write it so anyone can understand what we need and why.”

Watson said she enjoys working with the department because it gives her the opportunity to learn a lot about different things dealing with emergency response.

“We have guys in an EMT program right now, and I’m learning a lot because of what they’re doing,” she said. “The job is a little bit more demanding than I thought it would have been at first, but I love it. You never know what you’re going to run into.”

She said one of the biggest things for her is Tate trusts her to do her job.

“Chief trusts me, and that goes a long way,” she said. “Unless something drastic happens, I plan to be here a while.”

Tate added that if he were to send Watson to rookie school, she would be one of the best firefighters he has.