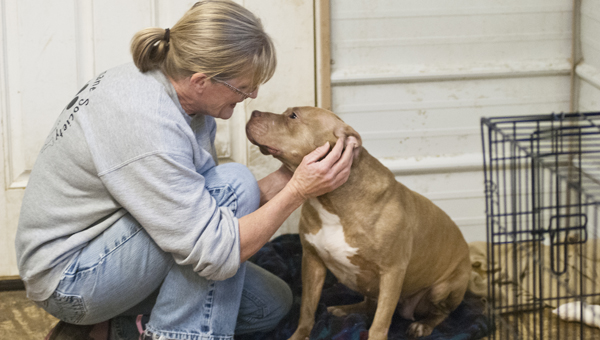 LABOR OF LOVE: Cindy McDonald with Blondie at Bigbee Humane Society in Demopolis.

Looking at it from the outside, the Bigbee Humane Society seems like a small operation, and if you look at their volunteer numbers, it’s obvious that they are.

But that’s the only thing about Bigbee that’s small. Bigbee’s two full-time volunteers and one part-time volunteer take care of 54 dogs when they are at capacity, which is almost all the time.

Bigbee Humane Society’s two full-time volunteers, Cindy McDonald and Martha Ellis, devote most of their time, at home and away from home, to the dogs at the shelter. McDonald has been working with Bigbee for about four years, and Ellis has been there for about two years.

“We would like to be able to take in more dogs, but we just don’t have the resources,” McDonald said. “We take dogs from the city pound after their 20-day hold if they aren’t claimed so they don’t have to be euthanized.”

McDonald said there haven’t been any dogs euthanized since she has been there.

“When animal control is full, and when we’re full, someone has always stepped up to take a dog in so it doesn’t have to be euthanized,” she said. “We get into a bind every two months or so, but someone always comes through for us. Our goal is to take in dogs, but we just can’t get caught up because we’re saving them from animal control as well.” 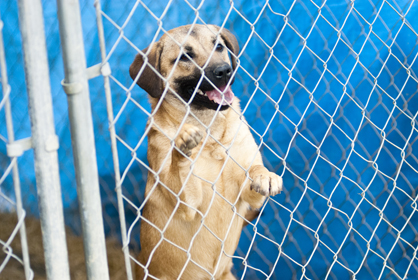 Bigbee Humane Society stays at its capacity of 54 dogs almost all the time.

There are 17 spaces owned by the city of Demopolis for animal control, and McDonald said they have been good about working with the humane society so they don’t have to put any dogs down.

McDonald said that some of the dogs they have at the shelter are not just strays, but pedigree dogs.

“We get full-blooded dogs sometimes that we know belonged to somebody, but rarely does someone call to claim them,” McDonald said. “We get calls about puppies all the time, but we have to turn them away because we don’t have the space for them.”

The biggest obstacle for the humane society recently has been funding. They are a self-sufficient organization and aren’t funded by the city.

The Bigbee Thrift Store makes some money for them, but with 54 or more dogs to feed and have vetted, the money doesn’t last long.

“We have to spend our own money a lot of times,” Ellis said. “It’s a job we have to take home with us, and a lot of times we run right past our husbands to get to the computer to check on everything.”

McDonald and Ellis said that even with all the dogs they take care of, they have names for each of them, and they know everything about each of the dogs.

“We’re selective about who we let adopt the dogs,” McDonald said. “We want to make sure they’re going somewhere that they will be happy and healthy. We care about them and who gets them.”

McDonald said they would like to have more time and resources to devote to the dogs, and she added that having their own place would be a perfect situation.

“Right now, we’re on city property,” she said. “We aren’t part of the city, but we get to use their property. All of our dogs are kept outside, and when it’s cold and rainy, there’s nowhere for them to go. Having our own place would be a perfect situation.”

McDonald and Ellis said they are thankful for the help they get, especially at the thrift store from Kathy Wilson, Virginia Overstreet and Sylvia Holman. They also said the Coast Guard will come help out when they have extra time.

Anyone interested in donating to the humane society can do so by going to their website, www.bigbeehumanesociety.org, and clicking the ‘Where to Donate’ tab. A link to their PayPal account is on that page. Checks can also be sent by mail at P.O. Box 474, Demopolis, AL 36732.