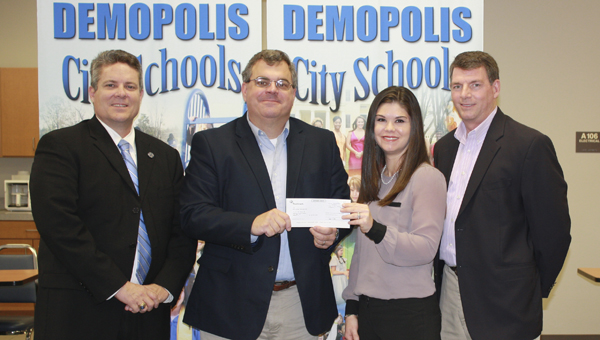 Demopolis High School’s National Academy Foundation of Finance and Insurance recently received a donation from Trustmark for a scholarship for a student in the class of 2017.

The academy is a new program that will begin in fall 2014 with classes focusing on finance and insurance. Current freshmen have the opportunity to apply to the academy during registration this year, and their class will be eligible for the scholarship.

Kelly Gandy, the director of the program at DHS, said there are currently 50 students that have said they want to participate in the academy.

“There are about 50 who have said they want to be in the academy,” she said. “All of the freshmen created a four-year plan to outline what they plan to do, and it looks like about 50 are interested right now.”

Gandy said the plans, as well as applications for the academy, will go home with students when the school sends home registration packets for next year.

In the academy, students are required to take at least five one-semester classes to graduate from it. There will be eight total classes for the students to choose from: applied finance, business economics, entrepreneurship, ethics in business, financial planning, insurance, principles of accounting and managerial accounting.

All students in the academy are required to take the insurance class, but students can choose among the other seven classes to finish the requirements.

There will be three teachers in the academy including Gandy. Courtney Taylor and Connie Davis will also be teaching academy classes.

“Students get to decide which classes they want to take, and they will also be required to have a small internship between their junior and senior years,” Gandy said. “A lot of times, they can set it up through where they already work.”

Gandy added that having NAF on a resume will help students with other scholarships. Completing the academy will give students a seal on their diploma, a graduation stole and a Career Technology Education completer endorsement on their diploma.

The academy has 21 board members that are all local businesspeople involved in finance or insurance. Jay Reynolds, owner of Marengo Insurance, is the chairman of the board.

The school is currently in the year of planning for the academy and have been working on implementing it for more than a year.

“It’s a big undertaking, and it’s a big change for the school, but it’s definitely a good change,” she said. “I really feel like this is my thing that I can do for this community. I hope it makes an impact with the students.”

The program is intended for both college-bound and career-prep students, and will be an asset to both after graduation, according to Gandy.

“For the students going to college, it will give them a leg up in business classes, and for students going straight into the workforce, it provides that extra experience before graduation,” she said.

DHS is a pilot for the National Academy Foundation of Finance and Insurance.

Any parents that have questions about the program can reach Gandy by calling DHS at (334) 289-0294 and asking for her.