The University of West Alabama invites the community to share in the Tuesday, March 18 dedication of the Campbell Environmental Education Center, Lyon Hall and Hughes Gymnasium.

The Campbell Environmental Education Center (CEEC) is home to offices of the Division of Educational Outreach’s Black Belt Museum and Black Belt Garden. In addition, an educational classroom and community meeting room (which is rentable to the public) are located in the building. 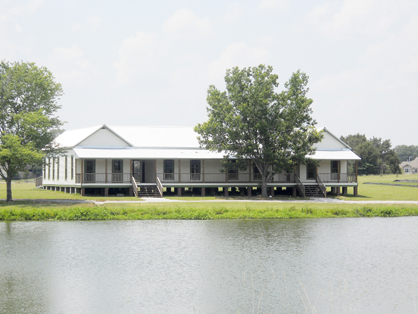 The former Campbell-Strickland House was built in southwest Sumter County in 1900 by Robert Campbell and Susan Alice Gully, and housed a family of eleven, including eight children and a local school teacher.

The house is divided into three sections, the left of which held (from back to front) a kitchen, a dining room, the teacher’s quarters, and Mrs. Campbell’s sun parlor where she painted and displayed her artwork. The front porch now extends across the entire length of the front of the house, replacing the sun parlor. However, the original windows that divided the sun parlor from the front room remain. These unusual windows recede into the attic space allowing them to be used as doorways.

The middle section of the house consisted of two large bedrooms that housed the five daughters of the family—Alice, Laura, Betty, Justina, and Sarah—while the right section of the house also consisted of two large bedrooms, the front one being for the family’s three boys (Bob, Slocum, and Wayne) and the back one being for Robert and Susan.

The house, with its white and green paint scheme, looks much like it did when first built. The sun parlor, which was added later, was too badly deteriorated to move. Stairs came off of the front porch in front of each breezeway. Paths from the stairways met at the gate of a long picket fence. The bed that was created by the front porch and pathways was filled with rose bushes and daffodils while the backyard was shaded by pecan trees. The Campbell’s ran a general store, situated nearby, along a road that ran in front of the house.

The house was donated in 2009 to the University by owners Larry and Crystal Strickland of York. The (CEEC) dedication is at 10:30 a.m. on the UWA campus.

Lyon Hall, the former Livingston High School, is the future home of UWA’s Julia S. Tutwiler College of Education. In addition to office, classroom and lab space, the building includes an auditorium and conference center.

The mission of the UWA College of Education is to prepare highly qualified teachers by providing opportunities for teacher education candidates to pursue a quality education and to assist in developing the important attributes of independent thinking, respect for the ideas of others, personal integrity and character.

Lyon Hall is named after Drs. Ralph Muse and Margaret Charters Lyon, both noted members of the teaching profession in Sumter County, the State of Alabama, and in particular the University of West Alabama.

Dr. Ralph Lyon served the University with distinction from 1948 until his retirement in 1973 in a number of roles, including Professor of Education, Professor of Social Sciences, Dean of the Graduate School, Vice President for Academic Affairs and Acting President, and, following retirement, continued his contributions by authoring The History of Livingston University.

Dr. Margaret Lyon, a distinguished educator in her own right, served the University from 1949 until her retirement in 1977 in several roles, including Professor of Educational Psychology, Acting Chairman of the Graduate Council, and Director of Institutional Research.

Hughes Gymnasium, part of the former Livingston High School campus, is named after LHS Coach Nelson Hughes. He led the school to state basketball championships and was a positive influence to students.

Hughes Gymnasium houses the Physical Education, Exercise Science and Sport Management faculty offices as well as secretary for the Department of Physical Education and Athletic Training. Specifically, this includes five of the twelve faculty members in the department. Two large classrooms are provided for the majority of the classes taught in the department. An Exercise Science Laboratory is included for practical and laboratory work by UWA students involved in studying the effects of exercise on human physiology. This laboratory is also used for teaching some small classes. The Gymnasium is used for teaching several Physical Education activity classes as well as the application of theory and techniques for several upper level Physical Education and Exercise Science classes. A small conference room is available for faculty and student meetings and a storage room is included to house supplies and equipment.

Hughes Gymnasium also serves as the Student Recreation Center which is used for faculty offices, includes a student game room, and is a venue student open recreational play and intramurals.

The Hughes Gymnasium dedication is at 3:30 p.m. on the UWA campus.