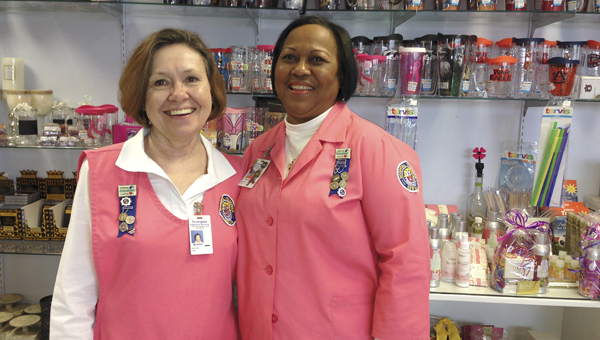 PINK LADIES: Shown are BWWMH auxiliary members Brenda and Johnnie Knott. The auxiliary was sometimes called “the Pink Ladies” early on but today has male and female members.

Even throughout this time as a patient, she recalls her interactions with volunteer community members who were a part of the auxiliary.

“I remember how nice they were to me and that’s what triggered me to join once I retired,” the now president of the auxiliary said. “Now, I really get to live out my dream.”

It was 40 years ago when the hospital auxiliary began to serve BWWMH with a group known as the “Pink Ladies,” due to the fact you could likely find them in their pastel pink jackets around the hospital.

The auxiliary’s purpose is to enhance the patient’s stay at the hospital and to organize fundraisers that benefit BWWMH. 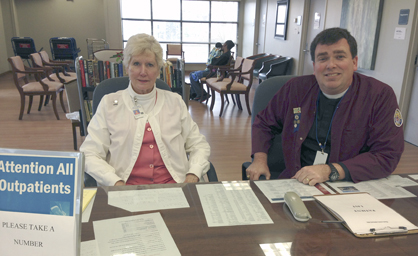 Twenty years after the then 29-bed facility opened its doors, Edith Whitfield, among others, saw the need to gather a volunteer group to fulfill various tasks.

It was only recently during the hospital’s 60th anniversary that Whitfield, 97, who is still active in the group, was honored with a plaque for her works.

“I was definitely very honored to be in her company,” Knott said about the recent event.

Demopolis resident Rebecca Culpepper, a member since around 2007 and immediate past president, said she enjoys her work with the auxiliary because it allows her to give back to her community.

“It’s the way I was raised, it is very pleasing to contribute without expecting anything in return,” she said.

“I believe you should do it and do it in the right spirit.”

One of the things Knott said she enjoys as a member of the auxiliary are the fundraisers that are planned to help support the hospital financially.

Some fundraisers include the Britches and Bows sale, the upcoming uniform sale on March 6-7, and the annual $5 Masquerade Jewelry Sale.

Another effort planned by the auxiliary includes the blood drives held three times over the year.

The donations and funds go to support the hospital with needed materials throughout the facility.

“We have helped to purchase wheelchairs, outpatient chairs in the lounge and TVs” Culpepper said. “We also redid the courtyard with roses and help to improve the aesthetics of the hospital.”

“We support six students interested in healthcare with $1500 scholarships to encourage people to come back to this area,” Culpepper said.

Knott has been a member of the auxiliary since 2007 and she said she had the usual little hesitation at first to talk on such an important role as president, but has enjoyed the adventure.

“At first I was a little hesitant with it, but also willing to accept the challenge,” she said. “But, I must say a leader is no greater than the person following.”

She said her time as a volunteer has been very rewarding through experiences such as helping the patients during their stay.

“When you carry a balloon or a coloring book to a child, it just brings a calmness to the heart,” she said about her interactions with some of the patients.

The auxiliary is open to those interested. There is an application to get involved and members are encouraged to work two four hour shifts in various capacities such as the gift shop, main lobby and the outpatient area.

“There is always someone less fortunate and a way you can help with the problem is sometimes by simply being helpful,” Culpepper said.

One of the core roles of the auxiliary is to impact the patient experience at the hospital, said Knott.

“We strive to make patients feel comfortable in the hospital during their stay with humility and faithfulness,” she said.

Overtime Culpepper said she has seen the auxiliary become more active and more involved in the community.

“We always keep in mind that oftentimes, we are the first impression people get of the hospital so we always try to be positive,” she said.

By working at areas such as the gift shop and other places throughout the hospital auxiliary members come in contact with many patients. Another unique way, one member chooses to make a patient’s day is by providing “Tray Favors” for the patients.

These are decorative treats to dress the food trays of the patients for holidays such as Valentine’s Day and Mother’s Day.

“She gives her time and energy so that patients will have something on that holiday and to see the thankfulness that flows through the patients expressions is a blessing to us,” Knott said. “The rewards of my job far exceed what I give.”