UWA Trustees vote not to renew Holland’s contract, place him on administrative leave 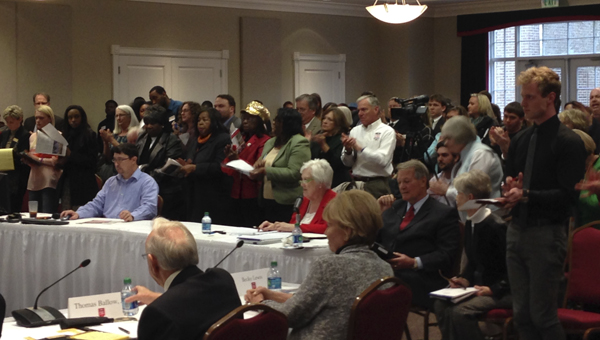 The UWA Board of Trustees voted not to renew the expiring contract of President Dr. Richard Holland during a board meeting Monday.

Holland’s current contract ends Sept. 30 of this year, and he had requested that his contract be extended until Sept. 30, 2016, when he planned to retire.

Trustee John Northcutt made a motion to turn the matter of the selection of the investigator over to the Board of Trustees’ Executive Committee and to report the selection to the board when it has been made. That vote passed, then Trustee Thomas Ballow Jr., made a motion to put Holland on administrative leave with pay and full benefits until the completion of the independent investigation. Jerry Smith seconded the motion, and the vote passed.

The Executive Committee is comprised of trustees Terry Bunn, Jerry Smith, Victor Vernon, John Northcutt and Tom Ballow, and they are required to report back to the full board within 24 hours of any decision they make. 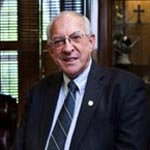 Blackwell is a former trustee at Auburn University, where he earned his bachelor’s degree. He spent 20 years in higher education professional and administrative posts, including service as a development officer for the AU College of Sciences and Mathematics.

Holland said following the meeting that he was surprised by the board’s decision, but that he welcomes the investigation.

“It’s a surprise, but I can deal with it,” he said. “I welcome the investigation. The board now has to address the stability of the alumni, the students and the supporters of this institution.”

Before the first vote on Holland’s contract was brought forth, the board listened to several comments from the general public that was in attendance.

Dr. Archie Hooper IV said he was in the student body in June 2000 and he spoke out to defend President Ed Roach at that time, and that he would do the same for Holland.

“The progress this University has made under Dr. Holland speaks for itself,” he said. “And thanks to Dr. Holland, I stand here as a medical doctor. We have seen growth of both this campus and the student body under Holland.”

Marcus Campbell from the Sumter County Commission also addressed the board before their vote.

“I applaud Dr. Holland on the job he’s doing here,” he said. “He’s all about doing what’s best for this University and this state. He’s leading the University in the right direction and we want him to continue to be President.”

The Rev. Patsy Chaney, a Livingston resident and minister, said it would take until Holland’s planned retirement date to find a suitable replacement.

“It will take from now until 2016 to find a suitable replacement,” she said. “The board needs to appoint a search committee. You know it takes a headhunter to find someone for a position like this. There’s nobody on this campus that could be promoted to this position.”

After public comments, a few board members also made comments. Northcutt said finding a president is the most important job of a trustee.

“I’ve looked at evaluations since he’s been president and I say this after 10 years of working with him, that I urge trustees to vote for the extension of his contract,” Northcutt said. “The University is in its best financial shape since the comptroller has been here for 44 years, we just received an exemplary review from SACS and our athletics are the most competitive they’ve been in the history of this University.”

Ballow said Holland is a good man, but that he’s not the future of UWA,

“This is a fine university,” he said. “It has been for a long time. Dr. Holland is a fine man, but he’s not the future of the University. We’ll have to make a change, whether it’s now or in 2016.”

Trustee Alex Saad said he felt the Presidential Evaluation was a good one and a fair one.

“I thought the evaluation was good and fair,” he said. “Then he came up with a corrupt report to scorch and burn the University. It’s obvious that he doesn’t think the evaluation was fair. Other people don’t know what’s going on here.”

The first vote for Holland’s extension failed by a 10-3 vote and the second vote failed by a 9-4 vote.

Trustee Randall Hillman said a successful administrative transition would require cooperation between the administration and the trustees, and in light of recent events, that wasn’t possible.

In other business during the meeting, the board voted to combine UWA’s two budgets into one budget going forward.

“I don’t see a downside to combining the two,” Saad said. “Why have two? Some people are getting paid from both. It makes it easier for us in budgeting to combine them.”