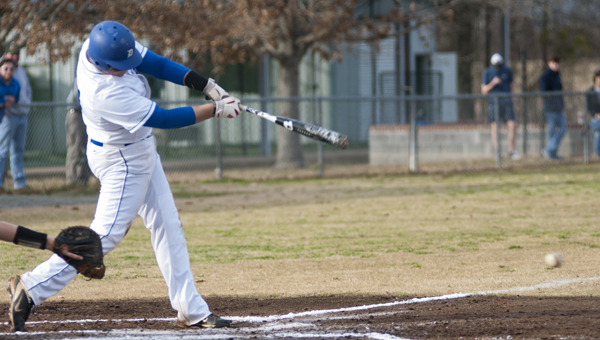 Jacob Rodrigues lines a ground ball up the middle against Sipsey Valley.

The Demopolis Tigers came back to tie their game against Sipsey Valley in the sixth inning, but they weren’t able to finish off the comeback in extra innings, falling 8-4 in eight innings.

The Tigers fell behind early after a shaky start, but they kept the game within striking distance to get back into it.

Sipsey Valley took a 2-0 lead in the first inning after Adam Sellers gave up two walks and two hits in the inning. Christopher Gray and Preston Patton crossed the plate for the Bears.

The Bears added two more runs in the third inning. Sellers walked the first two batters of the inning before being relieved by Michael Brooker. Patton and Garrett Lewis scored for the Bears in the inning, and the runs were charged to Sellers. His day came to a close with two innings pitched, five walks, two hits, three earned runs and a strikeout.

Demopolis was able to get one run back in the fifth inning after Tripp Perry walked to lead off the inning and later scored on an error. 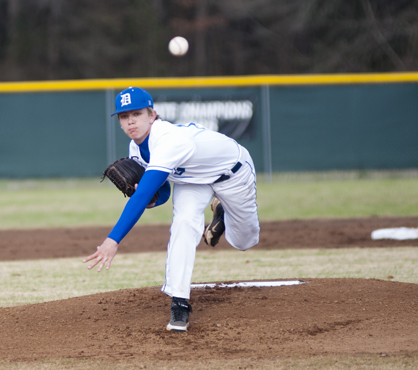 In the sixth, the Tigers were able to tie the game. Wil Stephens, Wesley Dunn and Perry all crossed the plate in the inning. Seth Aiken, Matt Eicher and Tyler Oates recorded RBI for the Tigers.

Brooker got into a jam in the top of the seventh with runners on the corners and nobody out, but Gray was thrown out at home after a passed ball for the first out. Brooker then got the final two outs of the inning to keep the game locked at 4.

In the top of the 8th, Brooker got the first out, but then gave up four hits in a row to the Bears, giving them their final lead. Oates came into the game to finish the inning, but the damage was already done. Christian Brown, James Mills, Charles Duncan and Logan Averett all crossed the plate for Sipsey Valley in the 8th to put them ahead 8-4.

The loss drops Demopolis to 4-5 on the season. Head coach James Moody said he was proud of the way his team swung the bats during the game, given that his team leaving 13 runners on base.

“That’s something we’ve struggled with, but I’m proud of how we swung the bats tonight,” he said. “We were aggressive at the plate, but we had a couple of guys who had rough nights and they came up in big situations.”

Oates finished the game 4-for-4 at the plate with a walk, a stolen base and a RBI. He also pitched two-thirds of an inning, giving up one hit and a walk. 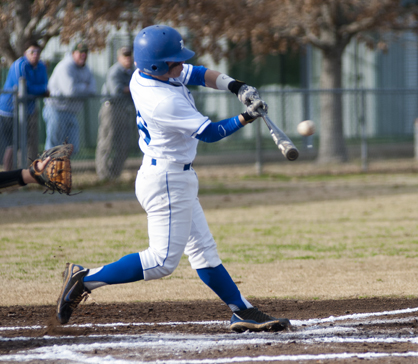 Matt Eicher connects with a pitch.

Brooker finished his night on the mound with five and one-third innings pitched. He gave up eight hits, hit one batter and gave up four runs.

“He’s coming off of an injury, but he pitched very well for us tonight,” Moody said. “I had no intention of leaving him in that long, but the flow of the game was good, and he was feeling good. He deserved a lot better than what he got tonight with the way he pitched.”

Moody said Oates’ performance is what he’s looking for with his seniors.

“He had an outstanding night at the plate,” he said. “We need guys like him to step up and lead this team.”

The Tigers will be at home again Thursday night when they host the Jackson Aggies at 4:30 p.m.