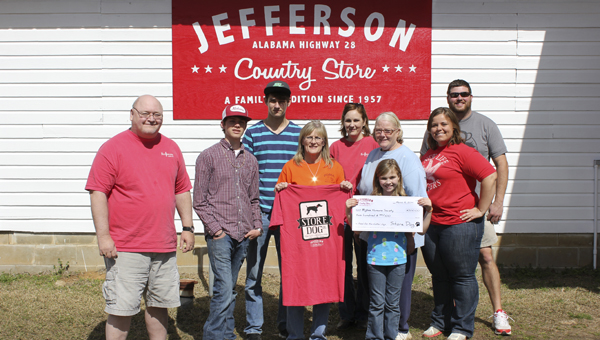 The Jefferson Country Store has been selling T-shirts over the last month to help support the Bigbee Humane Society.

Store owners Betsy Compton and Tony Luker had sold T-shirts at the store since it opened in October, but after hearing about the humane society’s struggles with finding a new thrift store location, they decided to sell T-shirts with the organization in mind.

“We had artwork together for two or three new shirts, but when we heard about them needing a new place for a thrift store, we really wanted to help them out,” Compton said. “We kind of combined the designs to make the new shirt.” 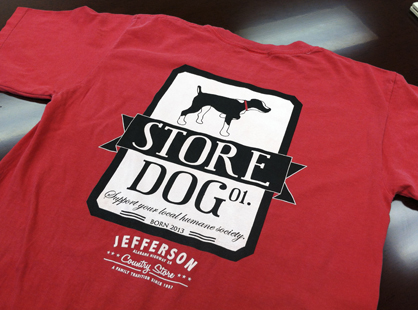 Store Dog T-shirts are available for $20 at the Jefferson Country Store. A portion of the proceeds go to the Bigbee Humane Society.

“We thought it would be a cool idea to tell the story of Store Dog though the T-shirts,” Compton said. “The dogs showed up after we opened, and he’s the only one left. We thought about trying to find him another home, but we decided we wanted to take care of him. I think he decided to keep us more than we decided to keep him.”

On Saturday, March 8, volunteers from Bigbee picked up a check for $200 from the store, which was from proceeds from the first round of t-shirt sales.

Bigbee Humane Society volunteer Cindy McDonald said she was surprised to hear that the store was going to sell shirts to support Bigbee.

“Betsy called and told me they wanted to help, and it was just out of the blue,” McDonald said. “They called us when the three dogs showed up and asked if we could help take care of them, and at that time we were full, so we couldn’t take them in. We’re very thankful they decided to do these shirts.”

McDonald added that she and Compton had never met before Saturday.

“These shirts are helping raise money and awareness for not only us, but any humane society,” she said. “This was very appreciated.”

Compton said they got their first batch of shirts on Feb. 11 and are already almost sold out of their second batch.

The shirts are $20, and Compton said they plan to order more shirts soon.

“This is such a good deed that the Bigbee volunteers are doing,” Compton said. “I wish they had more support, but we’re trying to do what we can from where we are.”

The Jefferson Country Store, located at 26120 Highway 28 in Jefferson, is open Monday through Saturday from 6:30 a.m. to 5:30 p.m. More information about the Store Dog shirts and the store can be found on store’s page at www.facebook.com/jeffersonstore, or they can be contacted by email at jeffersoncountrystore@gmail.com.