With a renewed focus on creating jobs and continuing progress in the 7th Congressional District of Alabama, Congresswoman Terri A. Sewell is seeking re-election to a third term in the U.S. House of Representatives.

Sewell, the Selma native who in 2010 became the first African-American woman elected to Congress in Alabama, said job creation and economic revitalization throughout the 7th District will continue to be major priorities in her third term. Since Sewell took office, unemployment has fallen from 13.9 percent to 9.8 percent in her district, which stretches from portions of Birmingham and Tuscaloosa to Alabama’s Black Belt Counties, including Marengo. 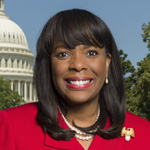 “We are not where we want to be, but progress has been made,” Sewell said. “We will continue to host an annual job fair in the district and work with local employers and our two-year colleges to develop training and apprenticeship opportunities.”

More than 2,000 job seekers and 50 employers attended the annual job fair Sewell held in Selma last year. She is hosting another job fair this year in Montgomery.

Sewell cited Golden Dragon Copper of China’s decision to build a $100 million copper tubing plant in Wilcox County, creating up 500 jobs, as a sign of progress in the Black Belt.

In an effort to get her constituents the tools they need to succeed in the job market, Sewell in 2013 created Project R.E.A.D.Y. (Realizing Everyone’s Ability to Develop Yourself). It provides tips on resume writing, how to dress for job interviews, and where to search for jobs online.

Sewell also said too many people are working harder but just can’t get ahead in today’s tough economy.

“I support President Obama’s plan to build an economy that’s fairer for working people, with a higher minimum wage, equal pay for women who hold the same job as men, and making sure the wealthy and big corporations pay their fair share in taxes,” Sewell said.

In 2013, Sewell secured over $635 million in federal grants for the 7th Congressional District and has helped constituents receive over $4 million in retroactive benefits owed to them by the federal government during her tenure in office. She also assisted Alabama’s tornado recovery efforts by securing $512 million in federal disaster assistance, and gained millions of federal dollars for road infrastructure improvements throughout her district. Since taking office, Sewell has stood up to Republicans to protect the Affordable Care Act (ACA) to ensure that the people of Alabama’s 7th District can get affordable health care.

Sewell sits on the House Financial Services Committee, an important position allowing her to be a voice for both the banking industry and constituents seeking consumer protection. She is committed to hosting financial literacy workshops throughout the 7th District.

Sewell also serves on the House Permanent Select Committee on Intelligence, the Democratic Steering and Policy Committee, and is one of only eight in Congress to serve as Chief Deputy Whip. These leadership roles ensure that Alabama’s 7th District has a voice as she has a seat at the table when important decisions are made.

In her third term, Sewell said she will also tap into her strong relationship with the Congressional Black Caucus and join fellow members in fighting for increased diversity among federal judges. She will also continue to fight against a U.S. Supreme Court decision that gutted major portions of the Voting Rights Act of 1965 in response to a Shelby County court challenge last year.

Sewell’s first successful bill in Congress honored the “Four Little Girls” killed in the 1963 bombing of the Sixteenth Street Baptist Church with the highest civilian honor – the Congressional Gold Medal. During the 50th anniversary of the tragedy last year, families of the four victims were presented the medals. Sewell also led Congress in honoring the Montford Point Marines, the first group of African Americans to serve in the Marine Corp, and the contributions of the Tuskegee Airmen during World War II.

“We must never forget the sacrifices made so that America can live up to its ideals of equality and justice for all,” she said.

For more information of the Sewell re-election campaign, go to www.sewellforcongress.com.