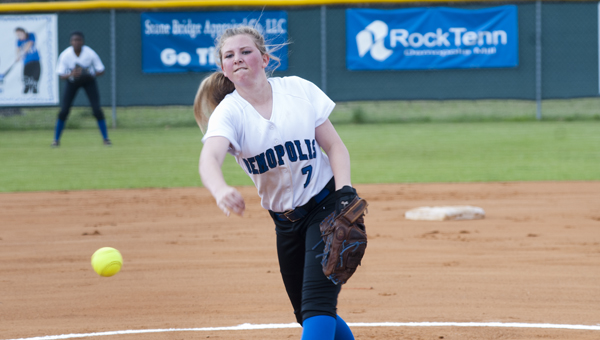 Kendall Hannah started the game for Demopolis and struck out eight Selma batters in four innings.

The Demopolis softball team (6-14) improved to 2-0 in their area Wednesday with an 11-1 win over Selma in six innings.

The Lady Tigers only allowed one hit in the game, which was surrendered in the first inning.

“We’re just trying to continue getting better,” DHS head coach Joey Browder said. “I’m looking for us to get better every day. I’m looking for some consistency from the girls.”

Demopolis took a 1-0 lead in the first inning on a RBI single by Anna Caroline Logan that scored Abby Latham.

In the second inning, the Lady Tigers plated three runners. A two-RBI double by Latham brought in Jessica Adams and Riley King, and Latham was brought around on a RBI single by Logan.

Kendall Hannah started the game in the circle for Demopolis and had eight strikeouts in four innings pitched. In the third inning, she struck out two batters, and Adams made a diving catch in center field to help out her teammate. 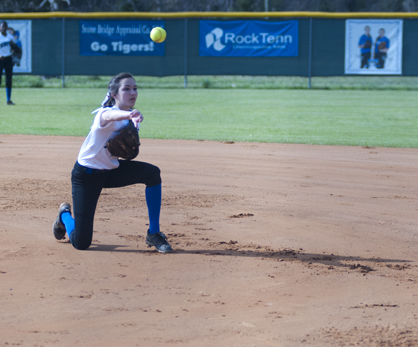 Anna Caroline Logan makes a play in the field from second base.

Demopolis added two more runs in the bottom of the third. The first run came after Logan was hit by a pitch with the bases loaded to bring in Adams. Cameron Thomason then scored on a wild pitch to put the Lady Tigers up 6-0.

Demopolis left three runners on base in the third, fourth and fifth innings. In the top of the sixth, Selma scored their only run after Ayana Moore walked and then scored on a throwing error by Latham behind the plate.

The Lady Tigers will be back in action Thursday at home against Sweet Water at 4 p.m.