The Demopolis Police Department is using a radar trailer at various locations around Demopolis to collect data and find the problem areas for speeding.

DPD has had the trailer for approximately eight years, according to DPD Chief Tommie Reese, but it has been in maintenance for the last year-and-a-half.

“It helps make people conscious and aware of their speed,” Reese said. “A lot of times, people are just driving along and will look down to realize they’re speeding. The trailer will flash the speed red if it’s over the speed limit.” 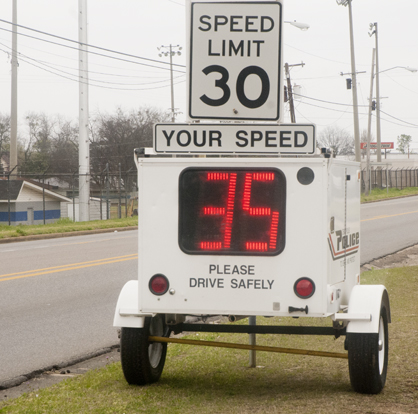 The Demopolis Police Department’s radar trailer flashes red when it detects a vehicle traveling over the speed limit.

Reese added that the trailer stores the data so the department can review it and see if that area is a problem area for speeding.

“It stores data of number of cars passing and how many of those were over the speed limit,” he said. “We’ve had it set up in school zones this week, and we’ll be using it quite often around town to see what our problems areas are. We can assign cars to those areas once we have collected the data.”

The radar is able to read cars going both directions on the road and can differentiate which direction the car is traveling.

Officers are also able to use the reading from the trailer as an instrument for a citation if they see the car pass by.

Reese added it will be especially useful going into the summer months.

“We see the most traffic during the summer months,” he said. “The data we collect will be used to police the city so it can continue to be a safe place.”