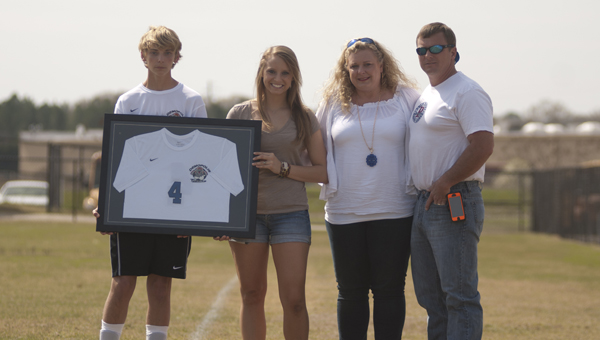 The Demopolis High School soccer program retired the jersey of Cody Webb and dedicated it to his family. Shown, from left, are Gavin, Victoria, Jami and Freddi Webb.

The Demopolis Tigers soccer team had a season-high 50 shots on goal in their 7-3 win over Hillcrest-Tuscaloosa.

Both teams played well defensively early in the game until Austin Brooks scored two quick goals for Demopolis to put the Tigers on top 2-0.

The Patriots cut the lead in half on an Isaiah Schatzline goal, but Cristian Velez pushed the gap back to two for Demopolis. Hillcrest got one of the goals back before the half on a goal by Ramses Guerrero to make the score 3-2 going into halftime.

In the second half of the game, Hillcrest struck quickly to tie the game at three on a David Roberts goal.

The Tigers didn’t allow Hillcrest to threaten again, though, and took the lead and added to it. 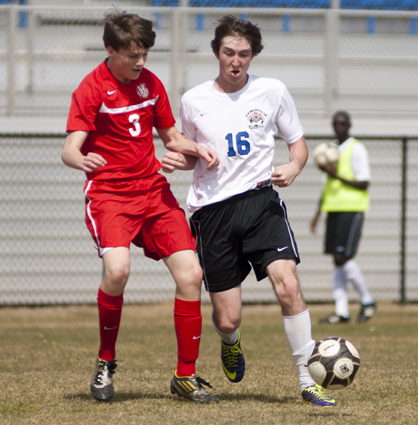 Austin Brooks fights for the ball against a Hillcrest defender. Brooks had three goals and an assist in the game for Demopolis.

Velez gave the Tigers the lead with an early second half goal, then Brooks completed a hat trick with his third goal of the game to put the Tigers on top 5-3.

Adam Brooker and Zachary Chu rounded out the scoring for Demopolis in the game.

“That was a big win against an evenly matched team,” DHS head coach Brad Daniels said. “I’m proud of the way we played in the second half.”

Brooker, Brooks and Jeremy Chu each had one assist in the game and Velez had two assists in addition to his two goals.

Ashley Dunn recorded a season-high four shots on goal for himself.

The win puts the Tigers at 7-2-1 on the season. Their next game will be Tuesday, April 1 at Tuscaloosa County High School.

“We come back after spring break and have a big game against Tuscaloosa County on the road,” Daniels said.

During halftime of the game, the soccer team dedicated the jersey of former teammate Cody Webb (No. 4) to his family, Freddi, Jami, Victoria and Gavin. Webb passed away in a car accident last May.