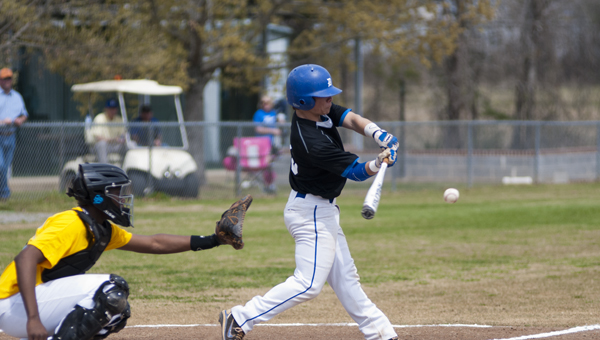 Matt Eicher swings for contact in Demopolis’ 11-1 win over Selma on Saturday.

Matt Eicher led the game off with a single and later scored on an error by the center fielder. A pair of RBI singles by John Anthony Morrison and Jacob Rodrigues brought in Tyler Oates and Michael Brooker to give the Tigers a 3-0 lead.

Demopolis added to the lead in the fourth with a RBI single by Oates that scored Ryan Schroeder. Then in the third inning, Morrison reached on a three-base error by the center fielder, and he was brought in on a Rodrigues single to put the Tigers on top 5-0.

Selma scored their only run of the game in the fourth inning. A delayed double steal allowed Aaron Drake to score. 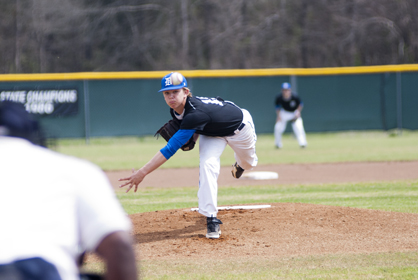 The Tigers stretched their lead to 8-1 in the bottom of the fourth with a RBI grounder by Morrison that scored Seth Aiken and a two-RBI single by Rodrigues that scored Oates and Brooker.

Demopolis ended the game in the fifth with three more runs. Eicher brought in Schroeder on a RBI triple, then a walk-off two-RBI double by Brooker scored Eicher and Aiken.

DHS head coach James Moody said he like the improvement he saw in his team.

“We swung the bat better and got great starting pitching,” he said. “We’re still having lapses in our at bats and not grounding them out like I’d like.”

Adam Sellers pitched all five innings for Demopolis, striking out nine batters and giving up six hits and two walks.

“We’re still trying to find ourselves right now,” Moody said. “In practice this week, we started putting our focus in the direction in needed to go. If we play hard and play together, that’s what we want.”

In Friday night’s game, the Tigers started slow but were able to come from behind late in the game to win.

Demopolis trailed 3-0 in the sixth inning and only had two hits, but they were able to score seven runs in the sixth to take the lead that would give them the win.

Rodrigues had two RBI in the game, and Wil Stephens and Schroeder each had one RBI. Eicher, Aiken, Oates, Brooker, Morrison, Rodrigues and Stewart all scored runs in the game.

Demopolis’ record now stands at 8-9, and they will face Holtville and Wetumpka on Thursday and Stanhope Elmore on Friday, all in Wetumpka.

“I want to see us play good defense and get some quality at bats,” Moody said. “I want us to leave there feeling better than when we got there.”