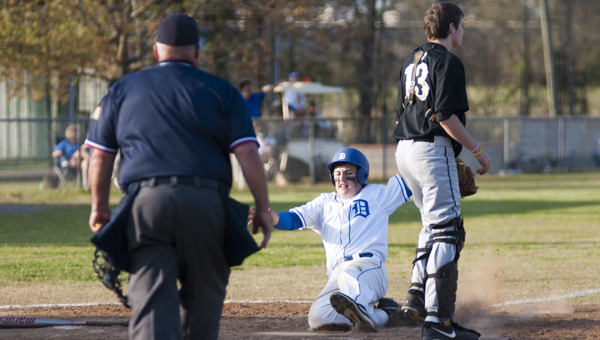 R.J. Cox slides into home for a run in Demopolis’ 6-4 win over Greenville on Tuesday.

Demopolis used a two-out rally in the fourth inning to overcome an early deficit against Greenville to help propel themselves to a 6-4 win Tuesday evening.

Greenville jumped out ahead early in the game, taking a 2-0 lead in the first three innings of the game.

Demopolis tied the game at 2-2 in the bottom of the third inning. Tyler Oates drove in Ryan Schroeder on a RBI fielder’s choice, then Michael Brooker sent a pitch sailing over the center fielder’s head for a triple that brought in Oates.

In the bottom of the fourth, Jacob Rodrigues walked to lead off the inning, and Tripp Perry came in to run for him. Wil Stephens moved Perry over on a bunt single, then Stephen Stewart popped out at first base. Schroeder grounded out, but Perry was able to score on the play to give Demopolis a 3-2 lead. Matt Eicher reached base on an error by the Greenville third baseman and Seth Aiken was hit by a pitch to load the bases. Oates came to the plate and drew a walk to bring in Stephens. 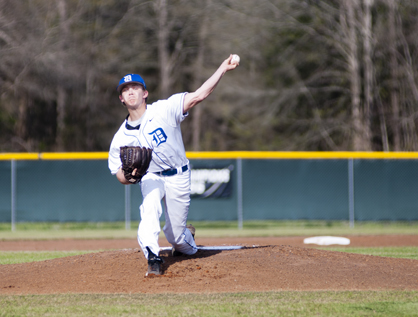 Adam Sellers pitched six innings for Demopolis on Tuesday, striking out 11 batters and only giving up one hit.

The home team added two more runs in the fifth inning to take a 6-2 lead. A RBI single by R.J. Cox scored Stephens, and a RBI single by Schroeder scored Cox.

Greenville threatened in the seventh with two men on base and the go-ahead run at the plate, but Wesley Dunn made a snow cone catch in left field to end the game.

Adam Sellers pitched six innings, only allowing one hit and two walks. He gave up a total of four runs, but only one was earned. The Tigers had six errors in the field to contribute to Greenville’s run total. Sellers had 11 strikeouts in his six innings of work.

Brooker came in to pitch the seventh inning and gave up one hit and one walk. He also struck out a batter.

“I’m pleased with Adam and proud of the work he put in tonight,” head coach James Moody said. “He gave an outstanding effort. I do want to see him get ahead in the count more and keep his pitch count down, but he had a great outing today.”

With the win, the Tigers move to 10-10 overall the 3-0 in the area. Demopolis will travel to Greenville on Thursday for a double header. Demopolis would clinch the area title with a win Thursday.

“Right now, it’s a matter of continuing to work,” Moody said. “We had some bad at bats today, and we swung at some poor pitches. We just have to keep working.”