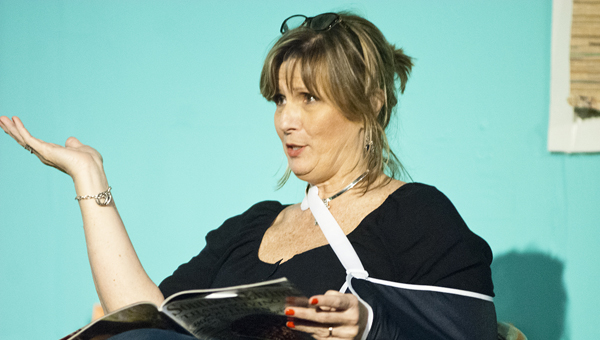 The Canebrake Players will present “Dixie Swim Club” in April. It’s a story about friendship and camaraderie, dating back to the club members’ time together on their college swim team.

Opening night is Friday, April 11 at the Old School on Main in Demopolis. Performances will continue Saturday, Sunday and Monday.

Every day this week The Times will be featuring one of the five cast members: Donna Bishop, Kelley Freeman Mullins, Laurie Willingham, Dana Freeman and Candace Jones Colgrove.

Laurie Hill Willingham plays Vernadette, a humorous, hard luck case with an eternal dark cloud hovering above her. Not so in this gal’s real life. Laurie is wife to Paul, mother to three grown children, and doting grandmother to Camilla and Crosby Smith.

Laurie is the plant administrator for GEO Specialty Chemicals and loves her job of 17 years. She is very caring about the people within her company and enjoys calling and checking on her customers.

She did one more show before stopping to raise her children and when her youngest graduated high school, she went knocking on the theater door.

Laurie now has a hefty number of productions under her belt, both as an actress and as a director. Her favorite play as an actress is “Little Foxes.” More recently she has appeared in “Dearly Departed,” “All Shook Up,” “Oliver” and “Ring of Fire.”

Having directed two plays since performing, “Rumors” and “Return to The Forbidden Planet,” Laurie admits she was ready to tread the boards again. She loves “being a ham” on stage and was definitely drawn to Vernadette and the DSC story line.

This employed wife, mother, grandmother, actress and director is deeply rooted in happenings in her community and willingly participates or volunteers with a smile. She would like for people to know she loves God, her family and her fellow man.

Laurie says she gets a little “giddy” when she opens a fresh notebook and sees the first clean sheet of paper, and she says,”Oh, do you ever outgrow the love to color ?” We hope not.