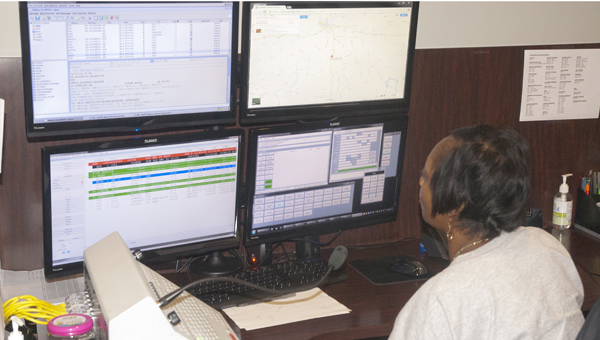 Along with their move from Demopolis to Linden, Marengo County E-911 also made a transition that changes the way 911 calls are taken.

Marengo County E-911 became of the first 911 centers in the country to go live with a new call-taking system in December.

The new system, called the Next Generation 9-1-1, puts Marengo County ahead of the game in 911 technology, according to Marengo County E-911 director Kevin McKinney.

“When we moved from Demopolis, we went ahead and got the new equipment,” McKinney said. “The old system was at the end of its life anyway, and we would have had to pay to move that system, then pay to replace it in about a year, so we went ahead and made the transition. Right now, we’re ahead of the game because the phone companies haven’t made the switch to allow this system to work yet.”

The biggest feature of the new system for the public will be the use of text messaging. Once the system is fully functional, people will be able to send a text message to 911 about an emergency. McKinney said he feels like in certain situations it will be a good thing, but that there will be things to figure out.

“In a situation like a home invasion, it would be great to be able to silently send a text message, but we won’t have any way to verify if it’s an emergency by reading the text,” he said. “Talking to someone over the phone, we can hear the panic in their voice and help get them calm so we can get as much information as possible, but I don’t know how we could do that with texts.”

He added that false alarms from cell phones are already common because parents allow children to play with deactivated phones. Although deactivated, the phones can still dial 911.

“We will probably have officers and ambulances going to a lot more false alarms than they currently do,” he said. “But we take information in and sent it out. It will be up to the departments to figure out how to handle the different situations.”

McKinney said the new systems are expected to be fully functional by the end of the year.

“The wireless companies still have to make this possible, but they’re testing it out in certain areas across the country,” he said. “There are so many small wireless providers that have to be on the same pages as the big companies, and that takes time.”

The new technology also allows the call center to receive a more accurate location from wireless calls. Instead of just knowing what cell tower the call came from, they will be able to get a location that is closer to where the call was made from.

“This technology is better than it’s been before, and it’ll continue to improve,” McKinney said. “It won’t be 100 percent accurate, but it will put us closer than we have been before.”

One thing that has already gone into effect since the changeover is that the 911 call center no longer has a desktop phone. All calls are received online and appear on the computer screens.

McKinney said they receive more than 4,000 calls every month.

Marengo County E-911 had their equipment through a contract with Synergem Technologies, Inc. of Greensboro, N.C., and McKinney said they were able to get the new equipment by signing a contract extension with Synergem.

Synergem’s CEO Nelson Clark said this is a historic event for 911 technology.