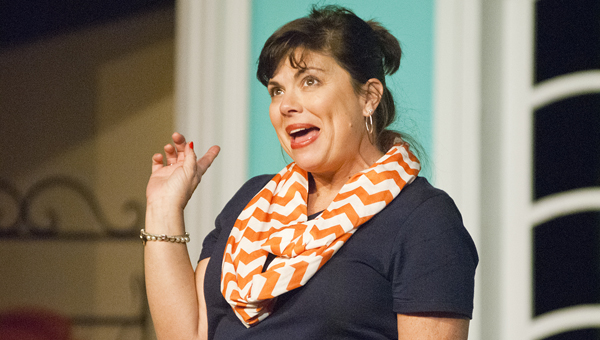 The Canebrake Players will present “Dixie Swim Club” in April. It’s a story about friendship and camaraderie, dating back to the club members’ time together on their college swim team.

Opening night is Friday, April 11 at the Old School on Main in Demopolis. Performances will continue Saturday, Sunday and Monday.

Every day this week The Times will be featuring one of the five cast members: Donna Bishop, Kelley Freeman Mullins, Laurie Willingham, Dana Freeman and Candace Jones Colgrove.

Dana Freeman is Lexie, a real southern belle who revels in her status as a man-magnet. She is wife of Mark and mother of Kaitlyn and Billy.

Dana is employed by the State Department of Education as part of Regional Support Staff for the Alabama Reading Initiative, and she is most interested in educating children to be college and/or career ready for whatever vocation they may choose.

Dana said she has been in and out of theater since her days in middle school and confesses she has always loved to “pretend.” Her past performances include “Autumn Garden,” “Dearly Departed” and “Rumors” to name a few, and her favorite, to date, is “Arsenic and Old Lace.”

From the beginning, she was attracted to all the DSC characters for their humor and depth. Her love for making beach memories with family and friends drew her to audition for this play.

Dana relates that happenings in her real life are so parallel to happenings in the script that she doesn’t feel she is “pretending” in those situations. She really “feels” what is playing out on stage and she is able to “tap into” her life to reflect the emotions of her character.

When asked to share something most people do not know about her or something she would like for people to know, she said she relates to her character as “I am pretty much an open book, and I hope I never grow too old to have fun.”