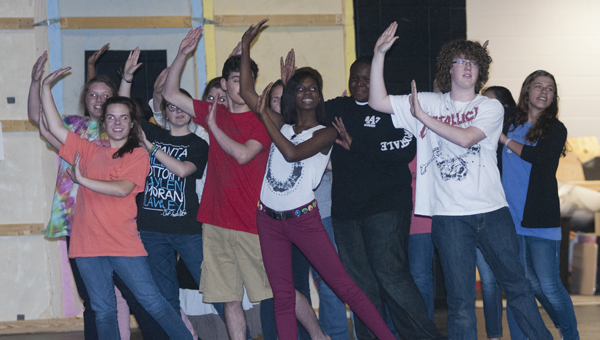 Members of the Thoroughly Modern Millie cast practice for the April 10-13 show.

Demopolis High School’s theater and choir programs are working together for their upcoming performance of Thoroughly Modern Millie Junior.

The show will be performed Thursday, April 10 through Sunday, April 13 at the Demopolis High School auditorium. The show will begin at 7 p.m. Thursday through Saturday and at 2 p.m. Sunday. Tickets for the show are $6 for all ages and will be available at the door.

The show is a romantic comedy about Millie Dillmount, a girl who moves to New York City from Kansas in the 1920s to become a modern woman.

Director Jody Tartt said the students love the 1920s and wanted to do a show set in that era.

“The kids really love the 1920s, and they encouraged me to choose a show from that era,” Tartt said.

The Demopolis High School choral program is in its first year back at the school after being cut several years ago. Tartt said it’s been a good experience working with choir teacher Heather Kennedy and her students. Kennedy is also the musical director for this production.

“It’s been great because her students already had experience with her,” she said. “Musical theater is an entertaining medium, and it’s expensive to do, so it’s great that we can pool our resources and work together to do a show like this. [Kennedy] has a lot to offer our students, and I hope this show encourages more students to sign up for choir.”

Tartt said there have been some bumps in the road with the show because of weather, which have pushed the production back to April 10-13.

“There is a lot going on that weekend with the Canebrake show too, but we encourage everyone to support both groups that weekend,” she said. “We’ve been working on the show since mid-January. This is a young group without much stage experience, but they’ve put forth a lot of effort and their talent has really grown. It’s been great to see them grow.”

The set for the show was built by the students in the Theater II Design class at DHS. Tartt added that Lynda Ray was a big help to the students in designing 1920s-style props. Derrick Robinson has also been involved in the production by helping the sound technicians.

“Lynda and Derrick really go above and beyond in helping us,” Tartt said. “They really are unsung heroes for us.”

The musical is based off of the 1967 movie starring Julie Andrews and Mary Tyler Moore. There was a Broadway show in 2002 that won six Tony awards that year.

The cast for the DHS play is as follows: