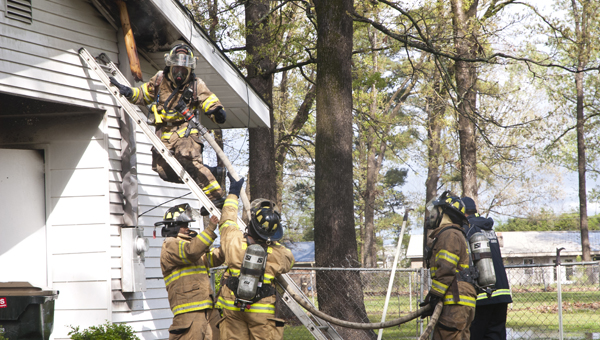 Demopolis Fire and Rescue works to extinguish a fire Friday afternoon at a house on Elmwood Drive.

A homeowner on Elmwood Drive in Demopolis was at home watching golf Friday afternoon when he heard a pop, which turned out to be an electrical fire.

Demopolis Fire and Rescue responded to the fire at 1609 Elmwood Drive at 3:40 Friday afternoon.

The department used thermal imaging goggles to determine that the fire was concentrated behind siding and an outdoor electrical panel.

“It detects heat — you can look through walls,” Tate said.

No injuries were reported in the fire, and Tate described inside damage as minor. Fans were brought in to help remove smoke.

Demopolis Police and Alabama Power were also on the scene Friday.