The Southside Garden Club in Demopolis will host a district garden club meeting Tuesday at 10 a.m. at the First Presbyterian Church.

There are a total of nine clubs in the district, and the club expects close to 50 people to attend the meeting.

“It’s been a little while since we hosted a district meeting,” club president Imogene Eddins said. “Our last one was in 2009. There are two district meetings every year – one in the fall and one in the spring. We’re excited to be hosting again this year.” 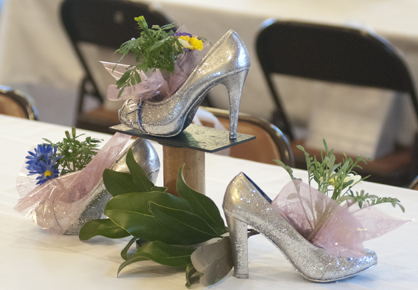 The Southside Garden Club decorated high heels to use as place settings for their “Stepping into spring” theme for the spring district meeting.

Marengo County Extension Coordinator Kathryn Friday will be the guest speaker at the event and food will be served during the business meeting as well.

The theme for the program is “stepping into spring,” and the Southside Garden Club members made place settings for the tables with high heel shoes that they painted.

“We got shoes from thrift stores and painted them silver and put glitter on them, then we put flowers in the shoes,” said club member Betty Baxley. “We’ve had a lot of fun decorating.”

The Southside Garden Club was also recently recognized as a Club of Distinction by the Garden Club of Alabama.

“That’s a big deal for us,” Baxley said. “We’re proud to have received that honor.”

Baxley said the club is also looking for more members to expand their current base of eight members. Anyone interested in joining can contact Baxley or any member of the club.