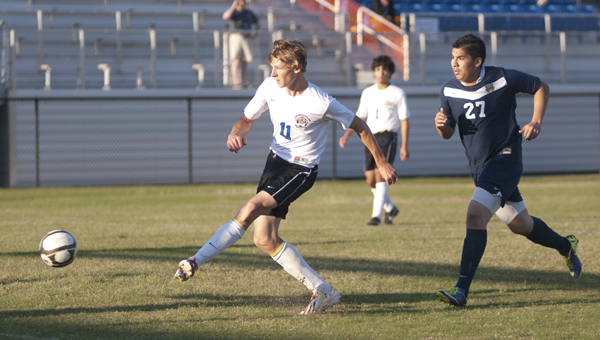 Adam Brooker takes a shot on goal in Wednesday’s game against Bryant High School. He scored two goals in the game.

Oscar Valdivia, Leif Midgorden, Austin Beckum, Christian Corbitt, Luis Galvan and Tommy Cristwell were recognized at halftime for their commitment to the program. Valdivia and Midgorden both played on the team all four years of high school. Corbitt played for three years, Galvan and Beckum played two and Cristwell is in his first year on the team.

“These guys are leaders,” head coach Brad Daniels said. “Oscar has been a rock all four years, and Leif is tenacious on defense. Beckum has stepped up and played great in goal, and I wouldn’t go into battle without him. Tommy Cristwell came in today and made two big saves for us in goal. I’m proud of everything all these guys have done. Now I want to make sure they know that getting to the first round of the playoffs isn’t enough.”

The Tigers improved to 8-2-1 overall with the win. They had 46 shots on goal, and Adam Brooker led the way with nine shots on goal. 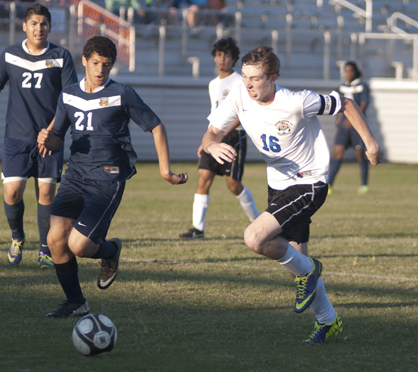 Austin Brooks attacks the Bryant defense. He scored one goal in the 6-1 win over Bryant.

Brooker opened scoring in the game less than four minutes after the start of the game. Bryant evened the score with 21 minutes to play in the half on a goal by Pahlo Gosteratos.

Valdivia scored on a penalty kick with 16 minutes to play in the half to give the Tigers a 2-1 lead.

After halftime, Austin Brooks got on the scoreboard with a goal to increase the Demopolis lead to 3-1. Brooker added his second goal of the game with 34 minutes remaining and Cristian Velez scored just five minutes later. Velez added the final goal of the game as well with 26 minutes to play.

All six seniors played significant minutes in their last regular season home game of the season.

The Tigers can win the region with a win next Wednesday, April 16 at Parker High School. The Tigers will play Parker in a double header to close out the season.

For a senior night photo gallery, visit The Demopolis Times on Facebook.