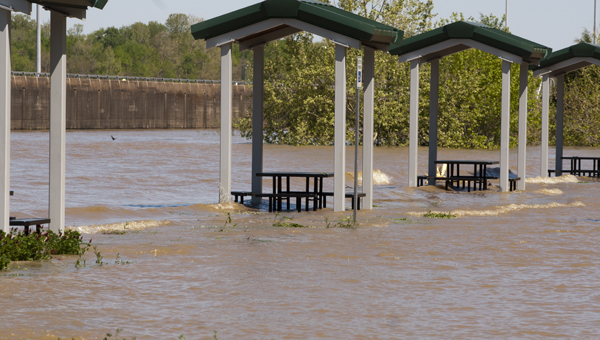 The waters of the Tombigbee River below Demopolis Lock and Dam have risen into the back parking lot at Spillway Falls Park.

Although the waters of the Tombigbee River are rising, the U.S. Army Corps of Engineers in Demopolis don’t expect it to become a major problem.

Brandon Smith said the Corps is used to seeing water levels rise to the current level of 81 feet once or twice a year.

“It happens fairly often,” he said. “We see this a couple times a year usually, but it’s been more than a year since they were this high, so it’s alarming to some people.”

The water level above Demopolis Lock and Dam was at 81.67 feet mean sea level as of 3:15 p.m. Wednesday.

“The water tends to rise fast until it reaches the natural berm at around 79 feet, then it starts to spread into the woods and only rises by inches instead of feet,” Smith said. “It takes a lot of water to get to dangerous levels.”

USACE Demopolis Site Manager Chip Dixon said they would only have to close four to five sites at Foscue Park when the level reaches 82.5 feet, but the park would not close completely. The normal water level is 73 feet. 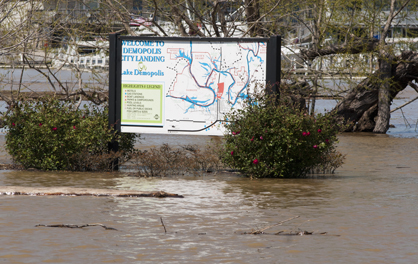 Water at the Demopolis City Landing covers most of the parking lot.

“Foscue shouldn’t be impacted too bad this time,” Dixon said. “We do want to advise people to not put their boats in the water right now because there is a lot of debris in the water. There’s a lot of large logs just under the surface that could cause problems for boaters.”

In addition to advising boaters to stay out of the water, the Corps also advised people with camp houses and trailers near the river to move anything out that they don’t want getting wet.

“The water is already getting up to the level of some of those houses and trailers, so if there are any valuables, you should probably get them as soon as you can,” Dixon added.

Below the dam, the water level is at 75.52 feet with flood stage at 68 feet. The river is forecast by the National Weather Service to crest Friday around 1 p.m. at 78.2 feet.

Smith said in the flood of 1979, which was the worst flood in Demopolis’ history, water levels reached 92.3 feet below the dam.

“Once the water crests and breaks, it doesn’t rise back up as fast if there’s rain,” Smith said. “Right now, there’s rain in the forecast for Monday, but it shouldn’t kick the level back up very much.”

As of Wednesday afternoon, Spillway Falls Park below the dam is still open, but the boat ramp and back parking lot are both under water. Dixon also said the road to Runaway No. 2 is inaccessible due to the high water.