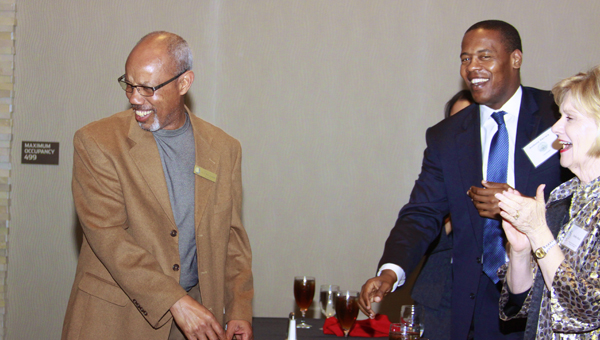 State Rep. A.J. McCampbell from Demopolis has been presented with the “Buskey Award” by the Alabama House Democratic Caucus. The award was presented during a ceremony Sunday evening.

“I wasn’t expecting this,” said McCampbell. “It is a true honor to be chosen by Rep. Buskey for this award. Rep. Buskey has devoted his life to public service, and earned the respect and admiration of Democrats and Republicans alike. I am humbled that he has chosen me for this award.”

The “Buskey Award” is presented every year to a Democratic member of the state House of Representatives in recognition of the member’s outstanding leadership and years of service. The award is named after Rep. James Buskey, a Democrat from Mobile and one of the longest serving legislators in the Alabama House of Representatives. The winner is chosen by Rep. Buskey and presented with a plaque.

“AJ has stepped up and done a superb job of leading the House Black Caucus,” said Rep. Buskey. “He has proven himself as a leader, and I am proud to present him with this award.”

McCampbell is currently serving his second term in the Alabama House of Representatives. Prior to his time in the legislature, he served in law enforcement as a police officer, probate officer and investigator with the district attorney’s office. He currently works as a State Farm Insurance Agent in Demopolis, where he lives with his wife, Diana. He has two daughters, Erica D. Hargrove and Calida Joy McCampbell.