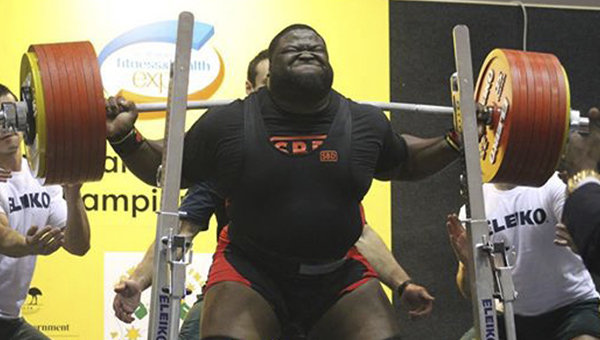 Ray Williams set the world record in raw squat with a lift of 903.8 pounds.

He set the world record for raw squat at the Pacific Invitational in Melbourne, Australia with a lift of 903.8 pounds. A raw squat is a squat without knee wraps or any assistance. He said it’s just himself, a belt and the weight.

Williams has only been lifting competitively for just over a year, but has been making waves in the powerlifting community since his first meet in February 2013. He set a United States record in that meet with a raw squat of 860 pounds.

“I’ve come a long way since I started,” Williams said. “The way I train, I’ve learned more about what to do and how to stay healthy. I’m figuring out what works for me.”

Despite being a world record holder, Williams said he’s not satisfied.

“This is all fun to me, and it’s a step in the right direction, but the record doesn’t mean anything right now,” he said. “Somebody will emerge in a year or two just like I did and beat that mark. When people talk about drug-free raw squat, I want my name to be mentioned. I’m trying to be the best.”

Williams’ goal is to compete in the world championships in Johannesburg, South Africa in June.

“I’ve done 900 several times in training, so that was an average day for me,” he added. “When I get to South Africa, I want people to know what a good day is for me. God gave me a gift and I want to see how far it takes me.”

Growing up in Demopolis, Williams played football at Demopolis High School and was a member of the record-setting 2004 state championship team. As strong as he is, though, he knew a football career was a long shot.

“Making it to the NFL is a one-in-a-million chance, so lifting is something I can do to put my name and Demopolis’ name out there,” he said. “When I walk up to the platform and hear ‘Ray Williams from Demopolis, Alabama,’ it motivates me.”

Williams added that his biggest motivation, though, is his daughter that passed away in 2011.

“She’s my main motivation,” he said. “I know she’s watching me, and I want to her to be proud.”

He added that his short-term goal is to get comfortable lifting 950-pounds in training.

“My ultimate goal is to squat 1,000 pounds with no wraps, no suit…just me, a belt and the weight,” he said.

Williams said being from Demopolis is also a big reason that he’s where he is today.

“Demopolis is loaded with people who want to help others,” he said. “There are so many great people there. It’s a small town, and it gets overlooked, but if people go there and get to know the people, they see its somewhere with a lot of great people. I wouldn’t be where I am without the people in Demopolis.”

Williams currently lives in Fulton, Miss., with his wife, Reunda Williams, and their children, Tae’sean Williams, Daniel Singleton and SaRaya Willams. He is the defensive line coach at Itawamba Community College.

If anyone would like to support Williams in his journey to the world championships in South Africa, donations for the trip can be made at his GoFundMe page, http://www.gofundme.com/51jwwk.

“I am a proud Alabamian and my heart will always be in Demopolis,” he said. “It means a lot to me when I get support from my hometown.”