Sewell addressed a crowd of elected officials, community leaders and citizens about the work she is doing in Washington, D.C., as well as her plans for the 7th Congressional District.

She said that while the district faces hardships, she is working hard to leverage limited resources for the betterment of it. 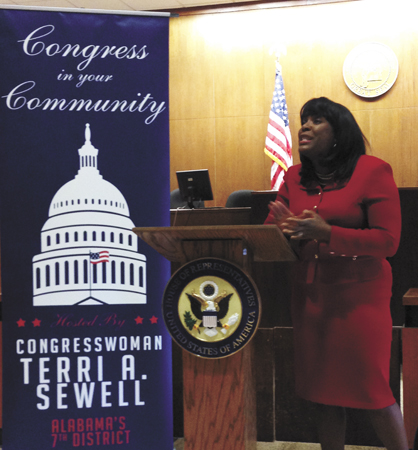 “I’m proud of everything going on here, and I feel like we’re moving in the right direction,” Sewell said.

Sewell said the key to getting through the hardships is investing in infrastructure and education.

“We have to worry about getting jobs for those we represent,” she said. “I believe we need to invest in infrastructure and education. We have to invest in our people. Our children have challenges ahead of them, and I want to work to make it easier.”

She added that people working together in Congress would go a long way in solving some of the problems communities across the country face.

She said that since she was elected in 2010, the average unemployment rate in her district has dropped from 13.9 percent to 10.1 percent.

“The people here want to work,” she said. “We just have to create those opportunities.”

Sewell went on to talk about her annual job fair, which will be held in Montgomery this summer, as well as Project READY, which helps prepare people to enter the workforce.

“It’s possible to work together if we choose to,” she said. “I passed my first piece of legislation in 2013 with the Congressional Gold Medal honoring the ‘Four Little Girls’ who tragically lost their lives during the 1963 bombing of the 16th Street Baptist Church in Birmingham. Both sides worked together to pass it unanimously. Even though there wasn’t any money involved, it still shows that both sides can work together.”

Sewell said finding common ground is key to passing any legislation, and in order to get something accomplished, people have to make sacrifices.

“It’s a good day in Congress if you go into a room with three points you want to get in a bill and one of them makes it,” she said. “You have to be willing to compromise. It’s not always going to be perfect, but I don’t believe I was elected to be perfect. I think I was elected to help this district. The district is facing some challenges, but I hope we can see the opportunities in these challenges.”