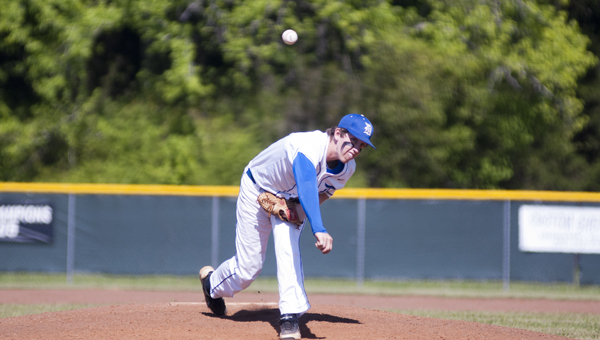 Michael Brooker, Wesley Dunn, Matt Eicher, John Anthony Morrison, Tyler Oates and Stephen Stewart were recognized in a pre-game ceremony for their commitment to the program throughout their high school careers. All six seniors played in the game for Demopolis.

The Tigers struck first in the bottom of the fourth with two runs. An RBI single by Wil Stephens scored Morrison, then a RBI sacrifice fly brought in Stephens.

Demopolis added two more runs in the fifth inning to take a 4-0 lead. A sacrifice fly by Brooker brought in Ryan Schroeder and a RBI single by Jacob Rodrigues scored Morrison.

In the top of the sixth with Rodrigues on the mound, the Bulldogs put six runs on the board to take the lead that would give them the win.

A sacrifice fly by Paul Weatherly brought in Tate Gibbs to give Sweet Water its first run of the game. A single by Randy Mendenhall scored both Tanner Luker and Will Huckabee to bring the Bulldogs within one run. Branson Davis grounded into a fielders choice, but Ke’Monei Butler, who was running for Jonah Smith, scored on the play. Xavier McIntosh singled to bring in Mendenhall, then Gibbs reached on an error, which allowed Davis to score, giving Sweet Water the 6-4 lead.

Rodrigues pitched an inning and a third, allowing four hits and five runs. He also walked a batter and hit a batter while striking one batter out. R.J. Cox came in to finish off the sixth inning and pitched one and two-thirds innings, giving up three hits and allowing one run. Rodrigues was credited with the less.

For Sweet Water, Mendenhall started the game and pitched one inning, allowing one hit and striking out one. Smith came in and pitched three innings. He gave up two runs, two hits, a walk and hit a batter. He also struck out two.

Demopolis will host Benjamin Russell on Friday in the first round of the playoffs. Head coach James Moody said it will be a tough series for the Tigers.

“They’re a well-coached, fundamentally sound baseball team,” he said. “We need to continue doing what we do. We’re still building and still working, and we’re to the point that each at bat is huge now.”

“They’ve got 12 veteran guys, and we’re a really young team,” he said. “They’ve got some good pitching. We’re going to go out there and match what they do.”

First pitch for both Demopolis and Sweet Water will be 4 p.m. Friday with a second game following. If necessary, a third game will be played Saturday.

For senior day photos, visit The Demopolis Times on Facebook.