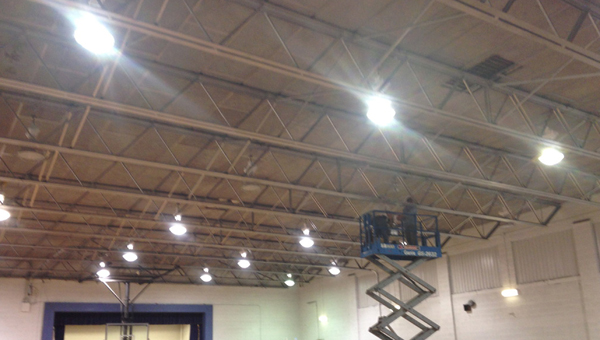 The Demopolis City Schools System has installed new energy-efficient lights in the gyms at U.S. Jones Elementary and Demopolis Middle School. The lights will also be installed at Demopolis High School.

The Demopolis City Schools System is in the process of installing new light fixtures in school gymnasiums that will help save the system money.

The system received an ADECA energy grant worth $15,000 that helped purchase new energy-efficient lamps for the gyms at U.S. Jones Elementary, Demopolis Middle School and Demopolis High School. Demopolis City Schools has been awarded an Alabama Department of Economic and Community Affairs energy grant in each of the last three years, Superintendent Dr. Al Griffin said.

The project was bid out and awarded to Lime Green, Inc. out of Huntsville.

“We’re looking at $10,000 in utility savings each year,” Griffin said. “We’ve been cut bare bones since 2011, and we have to be creative to be able to provide funds to continue providing quality education.”

The new lights are retrofit LED kits, which operate on an LED chip, and Andy Bernard, the president of Lime Green, Inc., said the new lights use 80 percent less energy than the previous lights and put off no heat.

“Not only will the school system save money on the bulbs using less energy, the air conditioning units will also have less to overcome to cool the gyms,” Bernard said.

Bernard said the new lights have a life expectancy of 100,000 hours, and they are guaranteed for 10 years.

“More than likely, they will last up to 15 years,” he said. “The maintenance staff in the school system already has a full-time job without having to worry about changing light bulbs, and this will save them that extra time.”

Bernard said he and his crew showed the DCS maintenance staff how to install the new lights in about 10 minutes, and they were able to do the rest.

“For all three gyms, the system is literally saving tens of thousands of dollars each year,” Bernard said.

Lime Green, Inc. has been in business since 2006, and they have been a LED distributor since 2009.