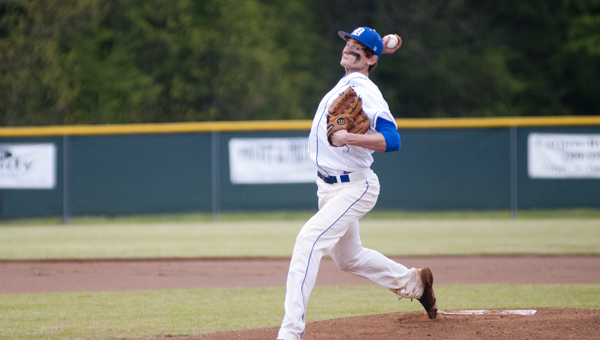 Tripp Perry pitched a complete game for Demopolis in the first game of Friday’s double header.

The Demopolis Tigers struggled to find an answer for the Benjamin Russell pitching staff in a playoff double header Friday night, resulting in two losses to end the season.

“Those two arms were as good as any I’ve seen in a long time,” Demopolis head coach James Moody said. “I’m proud of how we competed tonight. That’s all we can ask for.”

Tripp Perry started game one for Demopolis and pitched all seven innings. He gave up seven hits, walked three batters and gave up four runs, three of which were earned. He also had two strikeouts in the game.

“He didn’t have his best stuff, but by gosh he battled his rear end off,” Moody said. “He kept us in the ball game. He had a couple of innings there where they got on him a little bit. But the maturity I saw was about the fourth, he was physically probably done, but he battled through it. He gave us a chance and that’s the kind of effort we have to have to have a chance out here.”

For the Wildcats, Zach Rogers pitched a complete game shutout. He only allowed two hits, walked one batter and hit one batter. He also had 10 strikeouts. 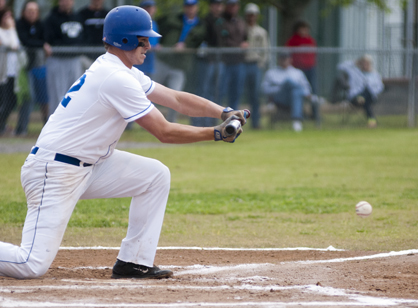 John Anthony Morrison attempts to lay down a bunt against Benjamin Russell on Friday night.

“He’s an Alabama commit,” Moody said. “He’ll probably be a bullpen guy for them. It’s just like I told the kids. You tip your hat. There’s days like that. He was outstanding. By far the best we’ve seen.”

Benjamin Russell scored two runs in the third inning to take a 2-0 lead over Demopolis. Sean Rape scored on a throwing error, then a RBI single by Seth Hendon brought in Bryant Horn.

In the sixth, the Wildcats added two more to their lead. A RBI double by Caleb Brooks scored Horn and a RBI groundout by Austin Moncus scored Hendon.

Brooker and Wil Stephens had the only two hits in the game for Demopolis.

Adam Sellers started game two for Demopolis and went four innings. He gave up six hits, three walks and four runs, three of which were earned. He struck out four batters in the outing.

“He struggled all night, but he battled through it,” Moody said. “He couldn’t get the sink on his fastball or the drop on his curve like he’d like, but this was a different environment for him.”

Rape started game two for the Wildcats and went all seven innings, walking three batters and giving up two hits and a run. Like his teammate in game one, he also struck out 10 batters.

The Wildcats evened the score in the bottom of the first on a RBI single by Horn that brought in Rogers.

In the third, Benjamin Russell added two more runs to take the lead. A RBI single by Hendon brought in Rogers and a RBI sacrifice fly to right field scored Horn.

The Wildcats added their final run in the fifth when Rogers scored on a passed ball.

Brooker came into the game in the fifth inning to relieve Sellers and pitched two innings. He allowed two hits and a walk, and he struck out two batters.

Matt Eicher and Stephens had the only hits in the game for the Tigers.

With the win, Benjamin Russell advances to the second round of the playoffs.