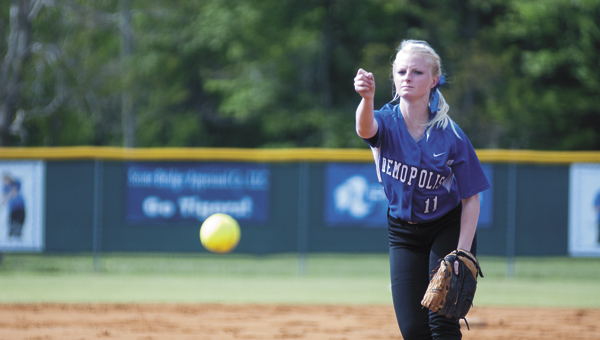 The Demopolis Lady Tigers clinched their area with a 10-0 win over Greenville in six innings Tuesday night.

Demopolis finished with a 4-0 record in the area this season with two wins over both Selma and Greenville. The Lady Tigers have six regular season games remaining before they host the area tournament Friday, May 2.

Riley King and Baleigh Grace, the only two seniors on the team, were recognized during a senior night ceremony following Tuesday’s game.

“I’m really proud of these girls,” head coach Joey Browder said. “They’ve battled all four years, and they’ve always been leaders. Their team spirit and determination are paying off this year.”

Demopolis opened up their scoring in the second inning by putting three runs on the board. Anna Caroline Logan scored on a passed ball, and Grace and King both scored on an error by the right fielder.

In the third inning, the Lady Tigers added two more runs to increase their lead to 5-0. Logan scored on an illegal pitch by the Greenville pitcher, and a RBI single by Abbey Latham scored Kendall Hannah.

In the sixth, the Lady Tigers ended the game on a RBI-double by Latham that brought in Nicole Wilkinson, who was running for Grace.

“We’re continuing to work,” Browder said. “We’re coming together and playing for each other, and that’s a good sign this time of year.”

As a team, Demopolis had 11 steals in the game.

“We practice base running every day in practice,” Browder said. “It’s important, and all that practice paid off today.”