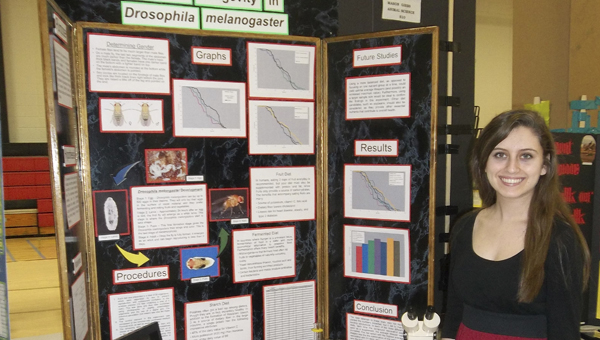 Rachel England, a DHS senior, won the Alabama State Science and Engineering Fair in the medicine and health category.

Rachel Michelle England, a senior at Demopolis High School, won her category at the Alabama State Science and Engineering Fair at the University of Alabama at Huntsville at the beginning of the month.

She won first place in the state in the Medicine and Health category with her project, “Searching for the Fountain of Youth: Exploring the Relationship Between the Natural Phenol Resveratrol and Diet to Examine Longevity in Drosophila melanogaster.” She was awarded best in show by the Greater Huntsville Rotary Club, which was worth $50. Winning the competition awarded her $150, and she also won the Grand Award from the U.S. Army worth $50.

She was the only student from DHS and the surrounding area to compete at the state level. For winning, she was an all-expense paid trip to Los Angeles, Calif., to compete as a finalist at the International Science and Engineering Fair on May 11-16.

In addition to winning the state competition, England also won the West Alabama Regional Science and Engineering Fair at UWA in March.