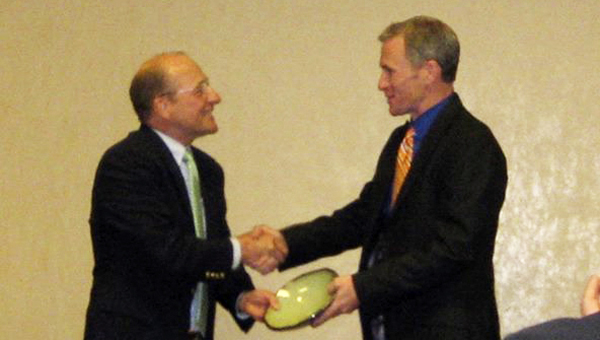 Trey McDonald, son of Mr. and Mrs. Richard McDonald of Demopolis, received the Spirit of Sustainability Award in ceremonies Tuesday at Auburn University.

McDonald was among 11 individuals and groups to be honored with the award presented by AU’s Office of Sustainabiity. This is the second year the award has been presented. Honored were alumni, faculty members, group initiatives and students.

Mike Kensler, director of the AU Office of Sustainability, said there are three criteria for receiving the award: motivation and commitment, impact, and level of engagement with others as a result of whatever action was undertaken.

“We wanted to celebrate some of these significant accomplishments and increase awareness and appreciation and perhaps inspire others so that they too would take some steps in these directions,” Kensler said.

McDonald is the sustainability coordinator for the University of North Carolina in Greensboro. He earned a degree in marine biology at AU in 1992 and his master’s degree in environmental science and policy at the University of South Florida in 2008.

For the last 15 years, he has worked in the environmental field, first as a biologist, then an environmental scientist and now as a sustainability officer.

During his career he has created sustainability plans for three separate universities. He co-teaches sustainability courses and continues to earn more certifications in the field

In his free time, he and his wife Sara have restored historic homes by using and repurposing materials from other buildings. As a result, they have received two residential historic preservation awards, one from Florida and one from North Carolina.