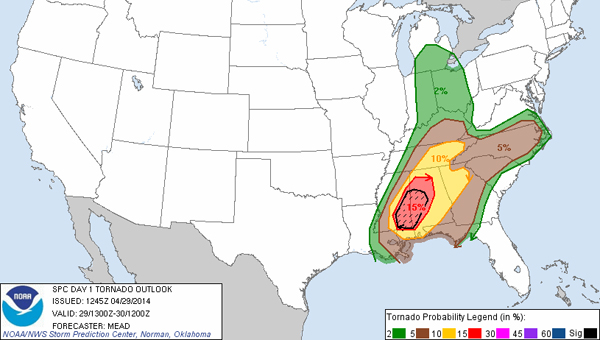 Marengo County is under an enhanced risk of severe weather, including tornadoes, Tuesday afternoon and evening.

There is a moderate risk of severe weather Tuesday afternoon into the overnight hours across west Alabama.

Marengo County is under an enhanced risk of tornadoes. The Storm Prediction Center says there is a 15 percent chance of a tornado within 25 miles of any point across most of west central Alabama.

Several tornadoes, a few of which could be strong, large hail and damaging straight line winds appear likely starting as early as 3 p.m. and going into the evening.

Into the overnight hours, storms are expected to become more linear with a continued risk for damaging winds but a few tornadoes will still be possible.

The Demopolis City Schools, Linden City Schools, Marengo County Schools and Marengo Academy all plan to dismiss at 12:30 today. The University of West Alabama will close at 12:30 as well.

Robertson Bank will close all its branches at 1 p.m.