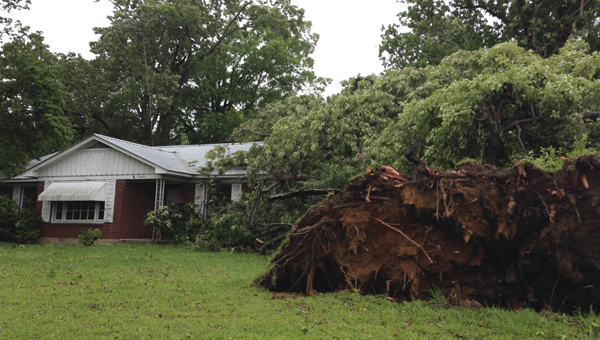 A tree fell on a house on Lake Lane in Demopolis during Monday’s storms.

While other parts of Alabama experienced tornadoes, most of the damage locally was limited to tree limbs that fell.

“We had no reports of structural damage come to us,” Marengo County EMA Director Kevin McKinney said. “We got some reports of trees down on county roads that resulted in power outages, but that was the worst we got.”

A tree did fall near a home on Lake Lane in Demopolis. Crews worked Tuesday morning to remove the tree.

A second round of severe weather was expected Tuesday afternoon. In response, all local schools closed at 12:30 p.m.

The National Weather Service in Birmingham issued a tornado for much of west and central Alabama, including Marengo County, until 10 p.m. Tuesday.

Please check back for updates as they come available.