Demopolis advances to area championship with win over Greenville 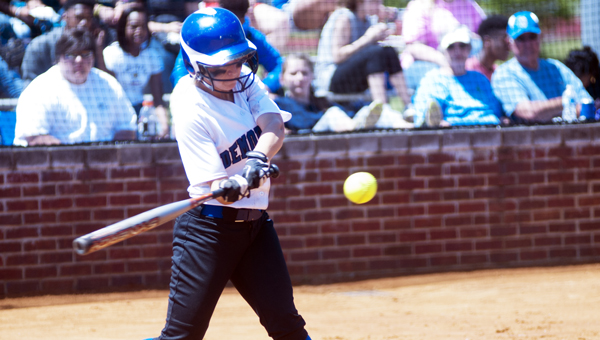 Cameron Thomason takes a swing at a pitch against Greenville on Friday in the area tournament.

The Demopolis Lady Tigers softball team earned a spot in the Class 5A, Area 6 championship game Friday with a 10-0 win in six innings over Greenville.

Demopolis hosted the tournament, and Greenville won their first game of the day 12-2 over Selma in five innings.

Natalie Tatum pitched a complete game shutout for Demopolis against Greenville, only allowing one hit and four walks. She also struck out six batters.

“She’s been working hard and continuing to get better,” head coach Joey Browder said. “The who team has. She did a good job today.”

Demopolis’ first run of the game came in the bottom of the second inning on a passed ball. Jessica Adams was able to come in to score on the play. On the same play, an error by the Greenville catcher allowed Kendall Hannah to come in and score as well. Demopolis took a 2-0 lead into the third inning. 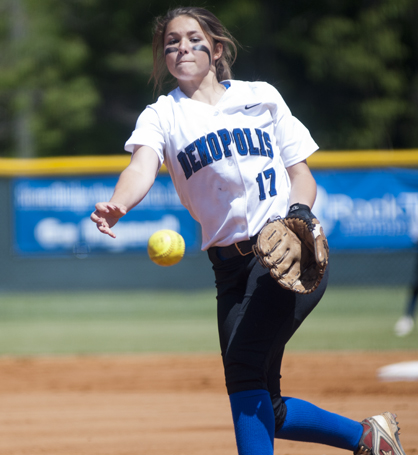 In the third inning, Demopolis added three more runs to their lead. Anna Caroline Logan scored on a passed ball to put Demopolis up 3-0. A sacrifice fly by Cameron Thomason brought in Abbey Latham and a RBI groundout by Adams brought in Baleigh Grace.

Neither team was able to create any offense until Demopolis ended the game in the sixth inning with a five run inning.

A RBI single by Courtney Smith scored Julia Veres and a throwing error on the play allowed Riley King to score as well. Logan singled to bring in Smith and Latham tripled to bring in Logan. A groundout RBI by Thomason brought in Latham to end the game.

Demopolis Lady Tigers softball has victories over Thomasville and Excel