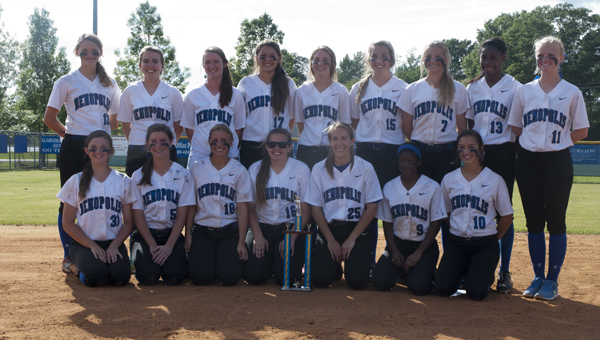 The Demopolis Lady Tigers won the Class 5A, Area 6 softball tournament with two wins over Greenville High School on Friday.

Demopolis won the championship game 18-1 in four innings to claim the title.

Hanna Malone pitched all four innings and allowed only one hit and an unearned run. She struck out four in the outing.

Offensively, Demopolis was on fire in the game, scoring three runs in the first inning, three in the second, seven in the third and five in the fourth.

Abbey Latham was responsible for all three Demopolis runs in the first as she hit a home run to bring in Courtney Smith and Anna Caroline Logan.

In the second inning, Smith scored on a stolen base and Logan was able to score on an error by the Greenville left fielder. Latham also crossed the plate in the second on an error to give Demopolis a 6-0 lead. 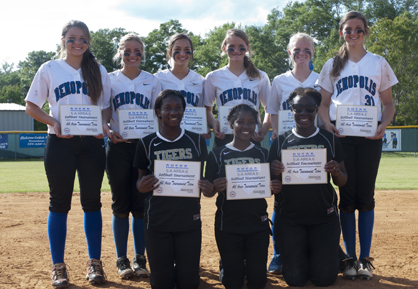 In the third inning, Smith knocked in Julia Veres and Riley King on a two-RBI single, and Logan brought in Smith on a RBI single.

Latham doubled to get on base then later scored on an error by the pitcher. A two-RBI double by Jade Montgomery scored Cameron Thomason and Kendall Hannah, then an error by the Greenville right fielder brought in Jessica Adams.

The Lady Tigers added their final five runs in the fourth. King scored on a passed ball, then Smith scored on a sacrifice fly RBI by Latham. A two-RBI double by Montgomery brought in Thomason and Hannah, and a RBI single by Veres brought in Adams.

Greenville scored one run in the bottom of the fourth on an error by Demopolis.

“I’m extremely proud of the way the team played today,” head coach Joey Browder said. “They did a really good job today. We just have to keep working this week to get better. We’ve come leaps and bounds since the season started.”

The Class 5A, Area 6 All-Tournament Team consisted of three players from Greenville and six from Demopolis. The team is as follows:

Latham was named the tournament MVP for her performance in her two games. She went 5-for-8 in the tournament with a home run, a triple, two doubles, five RBIs, five runs scored and a stolen base.

Both Demopolis and Greenville advance to the Super Regional in Troy next weekend.