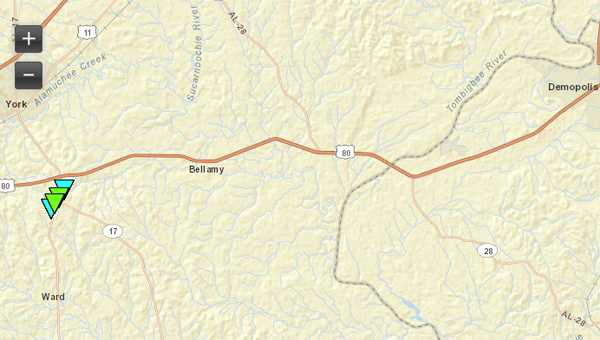 The Sumter County tornado was on the ground for 1.07 miles.

The EF-1 twister packed winds of 100 miles per hour and touched down at 9:30 p.m. Monday in a wooded area near W.L. Ezell Road in the Siloam community, about five miles southeast of York.

The tornado traveled northeast, crossed Alabama 17 and dissipated just south of U.S. 80. It was on the ground for 1.07 miles and 150 yards across at its widest.

Along W.L. Ezell Road and County Road 9, two well-built homes had significant roof and other structural damage. Nine additional houses in the community received some roof damage, and several outbuildings were destroyed.

A convenience store was also hit, resulting in major damage to the roof and building itself.  A fuel awning there was destroyed.

A local fire station took significant damage as well. Numerous trees were snapped and uprooted along the storm’s path.

The tornado was one of 23 to touch down in Alabama last Monday and Tuesday.

The most serious storms occurred in north Alabama and south Tennessee. In Limestone County, two peopled died and 30 were injured during an EF-3 twister.

No fatalities were reported in the Birmingham weather service’s area, but tornadoes in Tuscaloosa and Lee counties, both injured 13. Injuries were also reported in Blount, Jefferson and Pickens counties.

Though not related directly to a tornado, 21-year-old University of Alabama swimmer John Servati was killed Monday when a basement retaining wall collapsed on him during heavy rains. 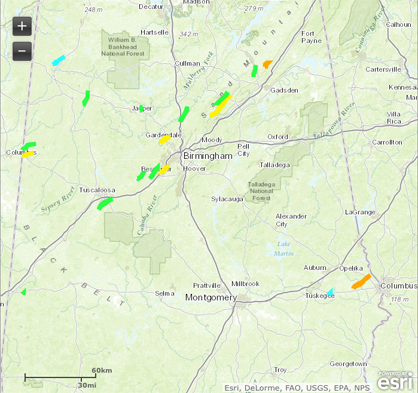 Map of tornado touch downs from last Tuesday and Wednesday inside the Birmingham National Weather Service’s coverage area. The Sumter County twister is shown in green at the bottom left hand corner.