Hasty was recognized for being an outstanding teacher at Marengo Academy. She was nominated for this award by the SGA. 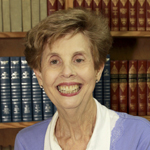 A long-time educator at Marengo Academy, Hasty has impacted hundreds of students during her teaching career. She has an excellent classroom management style, and she holds high expectations for student performance.

Even though Hasty is known for challenging MA students in the classroom, she is also known for always supporting her students during their athletic events. Hasty is not only dedicated to her students, but she is also dedicated to the success of Marengo Academy. She was instrumental in establishing and directing the school’s MA Classics, a grandparents’ club, which provides substantial assistance to the school.

Marengo Academy is extremely proud of Mrs. Hasty for being awarded this prestigious honor. She is not only a devoted educator she is a devoted mentor, friend and supporter of Marengo Academy.

On behalf of the entire MA family, Headmaster Robby James would like to thank Mrs. Hasty for her contributions to our school and community.